Why are seals having sex with penguins? 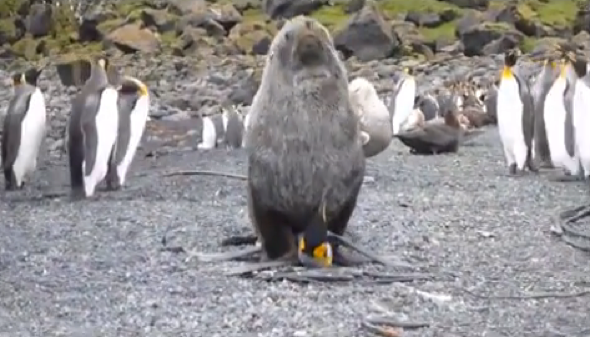 Antarctic fur seals have been engaging in shocking behaviour, and have been filmed attempting to have sex with king penguins.

In what looks like a horrific ordeal for the penguin, the seal chases the bird, catches it, and then tries to mount it for around five minutes a time, before resting and trying again.

This behaviour was first documented on the sub-Antarctic Marion Island back in 2006, reports the Mirror.

Now, it has been spotted on four separate occasions, and is thought to be becoming more frequent. Footage of one attack has been uploaded to YouTube.

According to the Daily Mail, during a number of the attacks, the seals are said to have successfully penetrated the birds.

After three of the attacks, the seals let the penguin go, but after one incident, the seal killed the bird and ate it.

The new incidents have been published in the study 'Multiple occurrences of king penguin (Aptenodytes patagonicus) sexual harassment by Antarctic fur seals (Arctocephalus gazella)' and features in Polar Biology.

Nico de Bruyn, of the Mammal Research Institute at the University of Pretoria, South Africa, said: "Honestly I did not expect that follow up sightings of a similar nature to that 2006 one would ever be made again, and certainly not on multiple occasions."

Scientist are unsure of the reasons for the behaviour, but sexual frustration and 'learned behaviour' have been two factors suggested.

According to the BBC, Mr de Bruyn added: "Perhaps it is a release of sexual frustration, given the hormonal surges during seal breeding season. It is very unlikely to be failed mate recognition - i.e. the misidentification of the penguin as a female seal."

He added that seals also have a capacity for learning, and that male seals may see each other coercing penguins, then attempt it themselves.

Why are seals having sex with penguins?
Up Next

Meet Ralph the bald penguin that lives in a wetsuit