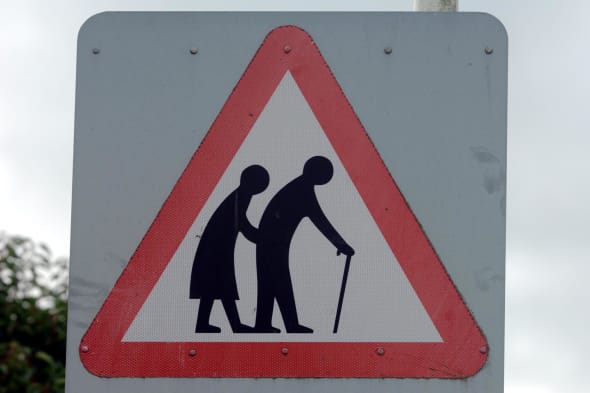 A government tsar has called for a road sign to be banned on the grounds that it discriminates against over-50s.
Dr Ros Altmann, who advises policy makers on business matters relating to older people, wants to see the 'elderly people crossing' road sign – which depicts a hunched-over couple walking with the aid of a stick – removed from use.

She argues that the sign, which is used to warn motorists of the potential of elderly and slow-moving pedestrians at hundreds of locations around the UK, is putting employers off hiring workers over the age of 50.

Dr Altmann plans to raise the issue with equalities minister Jo Swinson at a meeting next month, the Sunday Times reports.

Speaking to the Daily Mail, she said: "I would like to see the signs banned - just drop them.

"We have got an ageing population in this country. The vast majority are fit and healthy and in no way like that picture of people being stooped over and needing a walking stick.

"The signs give the message that old people are frail and disabled - it contributes to some of the age discrimination that we know exists in society.

"They belong to a bygone era and I think there is merit in focusing people's attention on something that everybody recognises."

Dr Altmann is currently working with major employers, including Barclays and energy giant Centrica, and is likely to reveal proposals aimed at helping older people start in new careers through internships.

She is also calling on the government to offer older workers the same level of job subsidies planned for younger employees.

Can a road sign really incite discrimination against older workers? Have your say in the comments section below.
Tags
Read Full Story Click here to comment