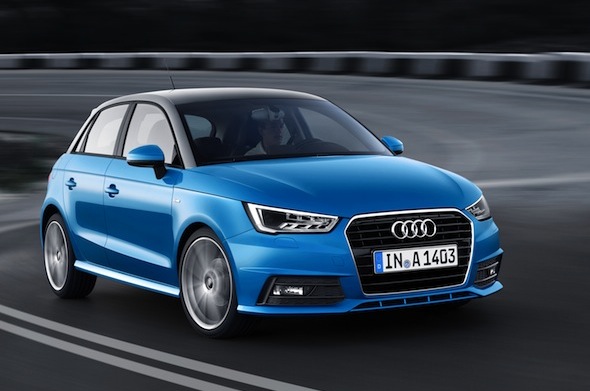 Audi has announced that a new three-cylinder petrol engine with CO2 emissions of under 100g/km, will join the A1 range, as part the car's mid-life refresh. The upmarket supermini also benefits from styling revisions inside and out, equipment upgrades and efficiency gains across the range of engines.
Customers now have a choice of two petrol and one diesel engine, which Audi claims are not only cleaner and more efficient, but also more powerful than the outgoing units.

The A1 will be available to order from the end of November, with the first customer cars expected for delivery in the first quarter of 2015. However, it won't initially be available with Audi's frugal new 1.0-litre petrol unit, which arrives in the summer.

From launch buyers will have a choice of two 1.4-litre petrol units, one of which is equipped with cylinder-on-demand technology for low CO2 emissions of just 112g/km, despite developing 148bhp. The entry level unit develops 124bhp and emits 115g/km.

Refreshed Audi A1 unveiled
Up Next


The 1.6-litre diesel is cleaner than ever before, with CO2 emissions in the latest version reduced from 99g/km to 92g/km in both three and five-door Sportback body styles. Fuel economy has increased from 74.3mpg to 80.7mpg.

Styling updates on the new model include a new flatter and wider grille, redesigned bumpers, a selection of fresh alloy wheel designs and a range of new exterior colours. Additionally, Audi drive select, which alters steering and throttle response at the flick of a switch, will now come as standard from the Sport model upwards.

The Audi S1 and S1 Sportback remain the performance flagship models of the new range. With a power output of 231bhp and Audi's quattro all wheel drive system, these cars are quite the pocket rockets.