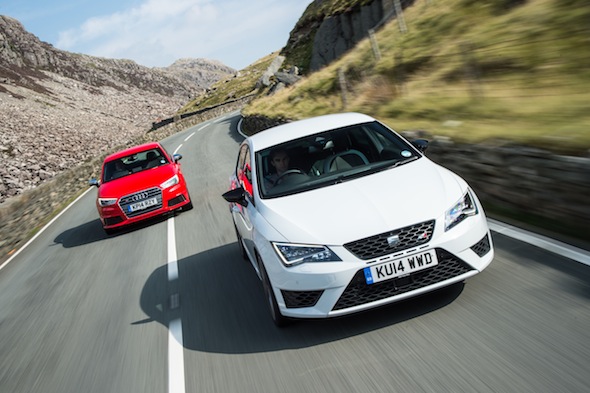 Our Seat Leon Cupra 280 long term test car impressed everyone who drove it during its brief six-months in AOL Cars' custody. So much so that it's made it into our exclusive Road Test of the Year lineup. Yes, a 2.0-litre hatchback against the likes of the blistering BMW M4 and rarefied Rolls-Royce Wraith. Sounds like a lamb to the slaughter? Don't be so sure...

There's a kink on the Evo Triangle, just before it blisters past the glistening Llyn Brenig Reservoir, that's a downhill left-right-left crested S-bend that's awkwardly off camber and incredibly fast. Hit it wrong and things get pretty tricky, pretty quickly. And I've just hit it fast.
You see, I'm in old faithful, our tried-and-trusted long-term Seat Leon Cupra, which we've brought along to take on the big boys, and familiarity has caught me out. The trouble with the Leon is it's bonkers quick. Ours is the 280bhp uprated version, with rapid-fire DSG gearbox, and over the six months she's spent on our fleet she's won over the hearts and minds of anyone who has been lucky enough to steal a weekend away with her. She's done so mostly by catapulting those in the driver's seat forward at such great momentum that it's all too easy to forget this is a humble hot hatch.

And it's because of these wicked charms that I'm currently scrabbling at the steering, two wheels off the ground, about to land pointing the wrong direction to the upcoming right-hander.

Just as I begin to think of a good excuse to tell my colleagues for being embedded in the hedge, nestled next to the sheep, old faithful sorts things out just as the Cupra always does, landing with a chirp and sprinting on, turbo whooshing, exhausts breathing deeply as it slingshots me on towards the next corner.

That's the thing about this Cupra. It's hugely entertaining and incredibly capable. On the road, grip levels are on a par with the four-wheel-drive Golf R we have here too, and it feels every bit as quick and as powerful. It's in the mid-range where the stomp really makes the 2.0-litre turbocharged lump belie its size, pushing hard from mid revs to the red line. It's a heady mix of capability, excitement and usability that makes this car so exciting. What's more, with a combined fuel economy of 42.8mpg, it's staggeringly efficient too. How did they manage that?


We think she's a looker as well. Those sharp angular Seat lines are distinctive, the daytime running lights hard to miss, and with twin exhausts at the rear and even more chiselled looks, few would deny it's a hot hatch that turns heads.

We also love the equipment. Our test car has a brilliant multimedia system that connects faultlessly to stream your music from your phone, a smart sat-nav unit that can be a little fussy to use but is full of detail, while the dashboard display can be adjusted every which way you please to show all manner of vehicle, audio and sat-nav stats. And who doesn't love stats?

The options on our test vehicle total £2,675 – that's a tenth of the cost of the options ticked on the Rolls-Royce Wraith spec sheet – and most of that on the Seat has gone on the leather and undeniably brilliant upgraded sound system.

All factored in, the £31,540 price tag does look a little steep, but when you take into account just how capable, entertaining and frankly good-looking this Cupra 280 is, it's really rather hard to ignore. The Seat is by far and away our favourite hot hatch on the market today, and even in this illustrious company it held its head high. We really can't recommend it highly enough.

Read the eighth installment on the BMW M4 here.