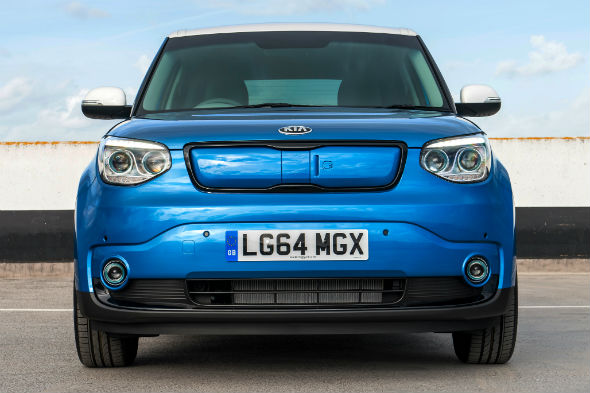 The Kia Soul EV is the Korean company's first attempt at an electric car. As a medium-sized lithium-powered machine the Soul takes on the UK's bestselling electric model, the Nissan Leaf, though Kia has more modest sales expectations for its new car.
Other rivals include the ultra-modern, upmarket BMW i3 and the affordable Renault Zoe. Unlike the Nissan and Renault models though, all Soul EV buyers own the car and battery outright, so there's no worry about having to pay a monthly charge to rent the batteries.

Kia also claims that the Soul can cover a greater distance between charges than all its rivals, at 132 miles per charge. The Renault Zoe's official figure is close behind at 130 miles, with the Nissan Leaf capable of 124 miles and the BMW i3 118 miles per charge.

What is it?
The Soul EV is an electric version of Kia's striking Soul medium car. In place of a petrol or diesel engine this machine has an 81bhp electric motor and a bank of lithium-ion polymer batteries, which should give a real world range of more than 100 miles.

Just one model will be available – a well-specified top-line version that includes sat nav, a reversing camera, digital radio, heated seats, a heated steering wheel and standard metallic paint. Unlike many other cars where buyers can choose from dozens of paint shades, stickers and a long list of optional equipment, just two colours will be available – two tone blue and white and silver.

Kia makes big claims about the efficiency of its new motor, batteries and auxiliary electrical systems. The batteries offer class leading energy density, meaning that they can power the car further for their weight than rivals. Helping to make the most of the car's range, it offers driver-only air conditioning, where just the vents directed at the driver are used, cutting energy consumption by not pumping air to the rest of the cabin.

What's under the bonnet?
Just an electric motor. The batteries are located underneath the cabin, meaning that the rear seats are slightly higher than in the standard Soul, reducing interior space marginally.

Charging the car on a typical domestic power supply takes around 10 to 13 hours, though charging the batteries from flat to 80 per cent on a rapid charger, takes just 33 minutes.

Also included is climate control along with heated front seats and a heated steering wheel.

Any rivals?
As a medium-sized electric car the Soul EV lines up alongside the popular Nissan Leaf and the more upmarket BMW i3. The Soul bests both for claimed range, though performance lags behind the BMW somewhat.


What's it like to drive?
As an electric car the Soul EV is supremely smooth and quiet at city speeds. The only noise disturbing the silence is a virtual engine hum that is created under 13mph to alert pedestrians to the presence of the car.

The electric motor provides instant power, which makes for quick progress away from traffic lights, though the BMW i3 is substantially perkier.

The ride is smooth, though a little firm, while the steering and controls are light and easy to handle. However, the brake pedal does need a fair amount of pressure to bring the car to a quick halt.

The light interior gives a good feeling of space, though materials don't feel as high quality as those in the rival BMW. Despite the batteries hidden underneath the cabin floor, there is still a reasonable amount of space for rear passengers and a large enough boot for most buyers.

AOL Cars Verdict
The Kia Soul EV is an appealing electric car that drives well, offers a spacious interior and a huge list of standard equipment.

It's not the most upmarket, fastest or cheapest electric car on the market, but it offers a strong mix of qualities that should make it appeal to many car buyers who don't often need to go on longer journeys.

Whitty: We may see a ‘steady’ return to normality by spring