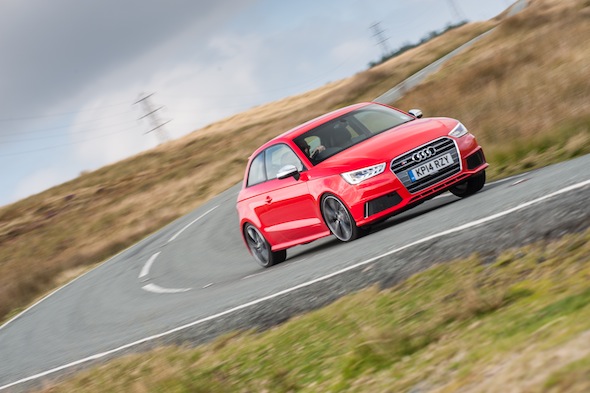 Applying its go-faster 'S' badge to its tiny A1 hatchback has seen the premium city nipper transformed into a rapid bahn-stormer. In isolation the S1 is a formidable machine, but will it be overshadowed by the heavy-hitters of our RTOTY line up? Daljinder Nagra takes to the wheel to find out.

On roads like these, size matters. If I were in the Rolls-Royce codpiece right now, I'd be a sweat-sodden mess; wincing at every passing tractor and unseen pothole as I attempted to navigate its barge-like girth on our charge towards Betws-y-Coed.
Instead, I'm in the dinky Audi S1, and, as it should be with a supermini, it's all just that little bit easier. There's room to breathe, room to adjust your line and room for your brain to think of something other than the horrendous cost of kerbing a wheel on one of the many jaggedy rocks that line our test route.

But why is there a gaudy red shopping car sitting like a pimple in the midst of our awesome
road-test line-up?

Because behind the fashionista accessorising and upmarket/downsizing branding, this particular Audi could just be the one to finally appeal to the keen drivers among us.

It starts with that oh-so-delicious combination of small car, big horsepower. The S1, particularly in this company, is truly diminutive; its short overhangs adding to its stubby looks and making it a doddle to place on the road. All of which makes the fact that it has a turbocharged 2.0-litre engine under the bonnet all the more surprising.

What's more, being an 'S' Audi, this tiny hatchback gets the brand's famous Quattro four-wheel-drive system, which – as I'm alive to tell you – works brilliantly, and endows this pocket rocket with huge grip and an incredibly stable feeling at speed.


It all adds up to one devastating package. Following our convoy as we steam through the Welsh countryside, the S1's compact dimensions and four-square stance mean it can be driven to the edge, whereas the larger and more powerful cars, even the likes of the Golf, have to be piloted in a more considered manner. Better still, Audi has seen fit to bestow the S1 with a proper manual gearbox, which only encourages you to wring every last revolution out of the zingy four-pot motor.

Slow things down and you begin to notice just how well Audi has transferred the ambience of its luxury saloons into such a small package. The cabin is wrought from high-quality plastics, and there's subtle design detailing everywhere you look – including a heater control panel lifted straight from the R8 supercar.

Granted, there isn't space to stretch out, and taller pilots may find the driving position a tad restrictive, but among its supermini peers, the S1 holds its head high, managing to recreate the solid, damped feeling of a much bigger car on the move. If you're tired of bloated luxo-barges, it's a compelling proposition.

It seems that while we were all busy wondering whether Audi really had what it took to take on the might of BMW's M division with its vastly more expensive saloon offerings, its team in Ingolstadt stole a march on its rival by bringing a truly entertaining small car to its showrooms.

The S1 offers performance on a par with its larger hot-hatch rivals in this test, and as it's smaller and more involving, it's far more exciting. Overall, it is the complete hot-hatch package.

Read the seventh installment on the Seat Leon Cupra 280 here.

What does the end of the furlough scheme mean for jobs and workers?