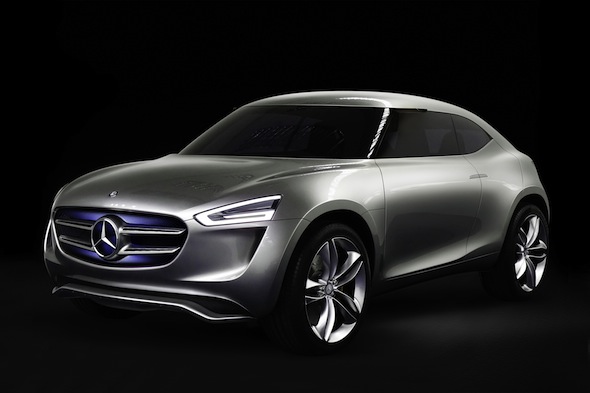 This is the Mercedes-Benz Vision G-Code, a new concept vehicle that points towards a new entry-level SUV from the German luxury brand.
While it is officially only being described as a design study for the moment, the G-Code is seen as Mercedes' riposte to similarly diminutive premium off-road vehicles such as the forthcoming Audi Q1.

Revealed at a ceremony to celebrate the opening of Mercedes' new research and development centre in Beijing, the G-Code showcases an advanced hydrogen-electric drivetrain – of which full details have yet to be announced – and a 2+2 seating arrangement.

While a future production version of the G-Code is likely to feature a more conventional petrol, diesel or hybrid configuration, the styling cues exhibited by the concept are likely to be carried over, at least in part, to a showroom model.

The new SUV forms part of the company's plan to attract a greater number of younger buyers to a brand that is traditionally favoured by older motorists.

The G-Code is the result of a collaboration between design teams at the Beijing centre and Mercedes' main design studio in Germany. It has been described by the company's head of design, Gorden Wagener, as representing "the modern lifestyle of the younger Asian society".

Mercedes previews compact SUV with new G-Code concept
Up Next


Some of the detailing is instantly recognisable as Mercedes, including the headlights, muscular bodywork and twin-blade grille design.

However, it also showcases flourishes unlikely to make it into production, such as a wrap-around windscreen and suicide doors at the rear.

Adding some glamour – or unbearable chintz, depending on your outlook – is a backlit front grille, which is illuminated in a variety of different colours depending on the chosen driving mode.

Other, slightly cooler bits of concept car tinsel include retractable cameras in place of door mirrors and a single full-strip of LEDs at the rear of the car, which acts as indicator, brake and tail lights.

Inside, the cabin features minimalist styling, with a central widescreen display taking up much of the instrument binnacle, and showing nearly all of the car's driving and entertainment functions.

Amongst the eco-highlights are 'Multi-voltaic' paint, which can act as a solar cell to charge the battery, but can also draw energy from wind blowing over the surface of the car. Power is also harvested from the motion of the suspension, and energy is fed back to the battery from a generator as the car moves up and down over bumps.

Would you like to the see the Mercedes G-Code make it into production? Have your say in the comments section below.
Tags
Read Full Story Click here to comment