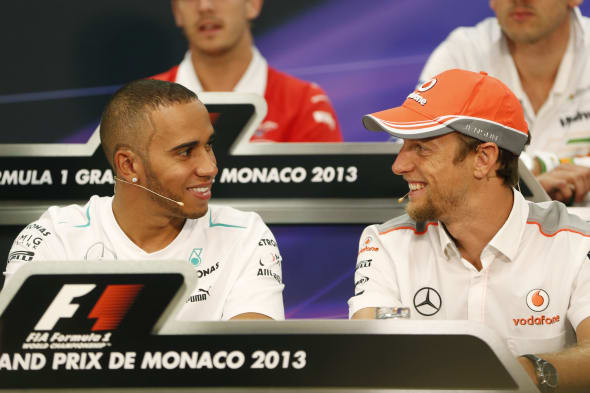 Lewis Hamilton has backed former teammate Jenson Button for a drive in the 2015 F1 season, saying he is "better than most drivers out there".
Speculation is rife that former world champion Button will lose his seat at McLaren for the 2015 season to current Ferrari number one, Fernando Alonso.

"Jenson is better than most drivers here. He's a great driver. So it doesn't correlate," Hamilton said, ahead of the Brazilian Grand Prix this weekend.

"If I had a team I would want him in it. He's a great asset for any team. It's not that McLaren need a better driver. There are not many out there. They need a better car."

McLaren is looking to return to championship winning form in 2015, partnering with new engine supplier Honda. The Woking-based team has made no bones about wanting to sign Alonso, who already has two championship titles under his belt, though a contract has yet to be signed. It is also yet to be decided who is to pilot McLaren's second car next year.

Richard Goddard, Button's manager, said: "I spoke to Ron [Dennis, McLaren chairman and CEO] this morning and he hasn't confirmed that Fernando has signed. And he says he still hasn't decided about who will fill the other seat. He's been completely open with me," The Guardian reports.

It is expected that if McLaren do sign Alonso, Button will be ousted by his rookie teammate Kevin Magnussen, with salary considerations (Button earns 20 times more than Magnussen per season at £10 million) expected to be a primary factor in the decision.

Speaking from Sao Paulo, Button said: "It's a strange situation. McLaren need to make a decision. This is a massive part of my life, Formula One and motor racing has been. And it's not going to stop. It will continue.

"I just don't know where that's going to be right now. I never feel like I'm being pushed out of the sport because I'm definitely going to be in it in some shape or form, and it's going to be a massive challenge, and very exciting."

Button joined McLaren in 2010 after winning the Driver's Championship in 2009 with Braun GP. He is the most experienced driver in F1, having raced 264 grands prix.
Tags
Read Full Story Click here to comment