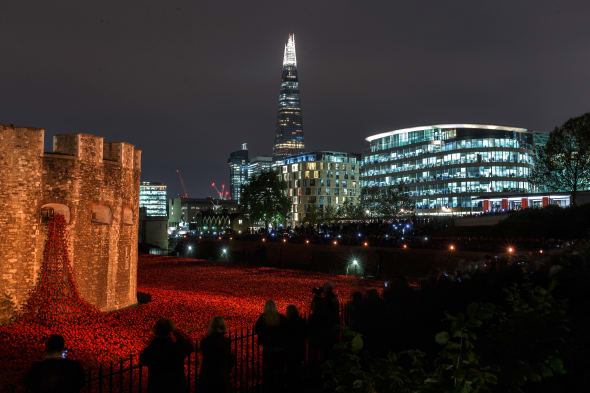 eBay has announced that it will ban the re-selling of ceramic poppies which had been installed in the moat of the Tower of London to commemorate the lives of those British soldiers who died during the First World War.

Each of the 888,246 poppies used in the piece 'Blood Swept Lands and Seas of Red' have been sold in advance for £25 each, and will be distributed after the installation ends on Armistice Day. All the net proceeds plus a guaranteed 10% from every poppy sold will be donated to armed forces charities.

However, some of those who bought the poppies have decided to use the opportunity to make a quick buck for themselves too. Adverts had appeared on eBay selling the poppies for more than twice their original price.

eBay has removed existing auctions and set up its systems to automatically reject sales in the future. A spokesperson told the Daily Mail: "'Our marketplace is not an appropriate venue for the limited edition ceramic poppies in view of the significance of each individual poppy as a memorial to an individual British military fatality." There is also the fact that the contract that people signed when they bought the poppy meant that they were forbidden from selling them on for profit.

The news is said to have come as a blow to Nigel Farage, who said on his radio show that he hadn't got round to buying one from the installation and had promised his children he would buy one from eBay.

It begs the question as to whether eBay is right to take such a firm line. One alternative would have been to insist that any of the ceramic poppies being resold would have to be traded as a charity item - and sellers could have donated at least 10% of the profits to the same military charities that befitted from the original sale. This could make thousands of pounds for the charities, make money for individuals, and appeal to people who had missed out.

Of course it would leave the moral question of whether individuals ought to be profiting from something that was intended to commemorate the lives of those who died during the war.

However, that moral question hasn't been asked particularly vigorously while the installation was drawing millions of visitors to the Tower - many of whom paid to go in and bought merchandise from the store nearby. Neither have any of the politicians dwelt on it when calling for the installation to remain beyond 11 November.

But what do you think? Should people be able to sell their poppies on?