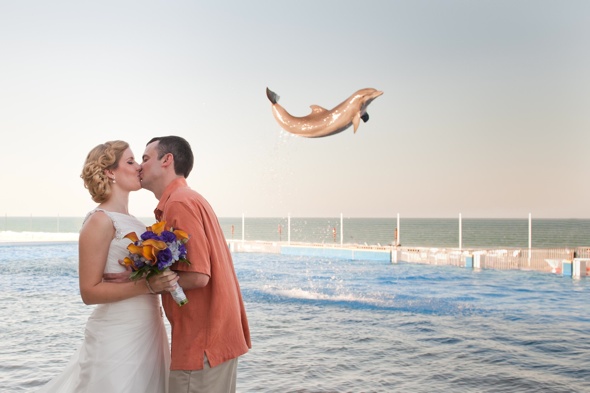 This is the incredible moment a couple had their wedding photo photobombed by a 'flying' dolphin.

Alexis and Steve Espey tied the knot earlier this year and were left stunned when the mammal tried to take centre stage on their big day.

The couple were enjoying the celebrations at Marineland Dolphin Adventure in St. Augustine when the dolphin stole a march on their first kiss.

The newlyweds were thrilled when they looked back at the snaps, by wedding photographers Sarah and Ben McLachlan, to see the dolphin stealing the limelight.

Sarah told Caters News: "The reaction to the picture of the dolphin appearing when Steve and Alexis kissed has been incredible.

"The dolphins appearing at their wedding was a really special moment, and was perfectly timed with their first kiss at the end of the ceremony.

"Everyone was already clapping for the couple, but when the dolphins jumped everyone went wild as though it was something from the movies - it was magical

"Later the couple got to take a few other photos with the dolphins, including our favourite one with two of them peering over the tank as Steve stole a kiss.

"It was a truly magical day."

Conan the giraffe is a regular culprit for photo bombing at Six Flags Adventure Land, New Jersey, USA. The cheeky giraffe decided to interrupt a couple's special moment by photo bombing their picture. Deirdre Mead and Jonathon Itskov were delighted with their hilarious snap.

This cheeky meerkat photobombed a group of fishermen's catch of the day picture in Namibia.

Alexis and Steve Espey got the picture of a lifetime when a 'flying' dolphin photobombed their wedding photo at Marineland Dolphin Adventure in St. Augustine.

Snowball, the camera-loving whale was so desperate to get in the frame that she even photobombed a snap of her friend.

Tourist Junichi Masuda, 34, from New York, was taking a snap of the world famous Incan city Machu Picchu, Peru when an opportunistic llama popped his head up at exactly the right moment.

Amanda Leigh and her husband Patrick were posing for photos at the Mystic Aquarium in Connecticut, USA, when 11-year-old beluga whale Juno swam behind them and flashed a big grin.

A scene-stealing sloth dropped in on a group of school kids who were taking part in an International Student Volunteers expedition in Costa Rica giving them an unforgettable holiday photograph.

Diver Alex Mustard got the perfect picture after a super-cute smiling seal photobombed his underwater snap off the coast of Northumberland.

Melissa Brandts and her husband got a surprise visit from a curious squirrel at Lake Minnewanka in Banff National Park.

Before you ask, a photographer did not risk their life to get up close and personal with this pair of jungle cats, the photo was taken on a remote camera on wheels.

This party crashing seal wasn't about to let the penguins have all the fun.

Melissa Brandts and her husband on holiday at Lake Minnewanka in Banff National Park.

This image was taken on a remote camera on wheels.