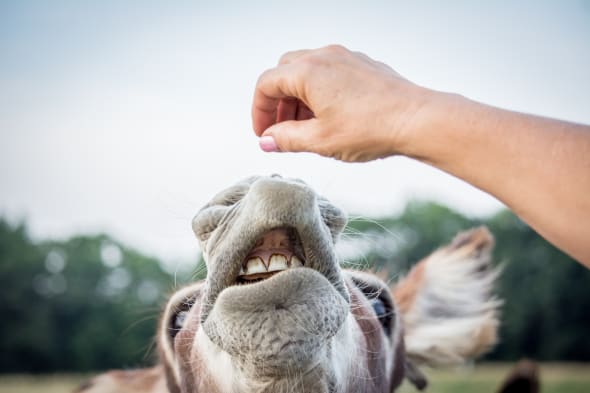 The Portuguese will laugh at you if you give a donkey sponge cake. In Finland, meanwhile, you need to prevent any frogs escaping from your mouth - and if you're in Spain, beware of giving anyone the pumpkins (even if it is Halloween).

These are just some of the funny translations of common idioms and expressions people use every day around the world.

Of course, the Brits have their own funny idioms - 'it's raining cats and dogs' or 'killing two birds with one stone', for example - which make perfect sense to us. But anyone from further afield would be forgiven for thinking we're slightly crazy.

Hotel Club has compiled a list of common idioms used abroad, including French expression 'avoir le démon de midi' which translates as 'having the midday demon' and means 'having a midlife crisis'.

If you say 'nie mój cyrk, nie moje malpy' in Polish, you are telling someone 'not my circus, not my monkey' which means 'not my problem'.

Add these sayings to your phrase book for your next holiday and check out the infographic below:

Katzensprung = a cat's jump (German) - a short distance away

Have you heard a strange expression while on your travels? Leave a comment and tell us about it below.

This may sound bizarre but in Victoria, Australia it's illegal to wear hot pink shorts after midday on a Sunday! It's hard to fathom the point of this law but it could have been introduced so that churchgoers returning home after the Sunday service weren't offended.

Don't get yourself in a sticky situation in Singapore where chewing gum is prohibited. The law was introduced because it became difficult and expensive to remove stuck chewing gum from public spaces. The sticky stuff even stopped the Mass Rapid Transit trains from moving when it was stuck on the doors.

In Italy's fashion capital Milan, there's still a law that exists requiring its citizens to smile at all times or risk paying a hefty fine. Of course the law comes with an exception... you're allowed to look sad when visiting a hospital or at a funeral!

It's illegal to leave the house without wearing underwear in Thailand. We're not sure how this law is enforced or what the penalty is but it's a good idea to pack extra undies if you're travelling to Thailand! It's also against the law to drive without your top on and the police do hand out tickets to shirtless motorcycle and car drivers, so beware!

If you're staying with friends or family in Switzerland and they live in an apartment, you may want to think again before having a drink before going to bed as it's still illegal to flush the toilet after 10pm in most apartment houses. We like how polite the Swiss are that they don't want to wake the neighbours with their toilets roaring in the late hours, but what about the unpleasant build-up in the toilet bowl?

The mince pie may be a sweet treat you enjoy throughout the festive season but did you know it's illegal to eat one on Christmas Day in England? This bizarre law was brought in by Oliver Cromwell in the 17th century, who put a ban on mince pies and anything to do with gluttony on 25 December.

In 2008, Mayor Massimo Cacciari banned the feeding of Venice's famous flocks of pigeons to cut the number of birds who were blamed for spreading filth and ruining the Italian city's stunning facades and monuments. This is one of the world's strange laws that exist and fines for feeding the birds start at 50 euros!

If you're thinking of renting a car in the Russian capital of Moscow, you'll need to keep it clean as it's against the law to drive a dirty car in the city and doing so could leave you with a hefty fine. But how dirty is dirty? A survey when the law was first introduced showed that motorists in Russia agree that a car is dirty when the number plate isn't visible!

In late 1799, a law banning women in Paris from wearing trousers was introduced and ladies wanting to 'dress like a man’ had to seek permission from the capital's main police station to do so. It was relaxed in 1892 so that trousers could be worn 'as long as the woman is holding the reins of a horse' and in 1909 women 'on a bicycle or holding it by the handlebars' could wear trousers. It was only in 2010 that French MPs discussed lifting the ban altogether!

If you're thinking of visiting the historic sites of Florence, you may want to leave that chocolate bar at home as it is an offence to eat or drink in the churches and public buildings. You could also be fined if caught sitting on the steps and courtyards in the city.

Leave that camouflage T at home if you're going to Barbados as it is against the law to wear the military-style clothing on the Caribbean island. It's not just for adults either as children are also prohibited from dressing in camouflage or carrying items with camouflage material.

Got a blocked nose and packed a nasal spray for your trip to Japan? You'll need to bring extra tissues instead as it is illegal to take some commonly available nasal sprays containing pseudoephedrine into the country. Being caught with one could leave you with a hefty fine!

Funny translations of foreign expressions
Save your bikini for the beach! While men walking around topless and women wearing Daisy Dukes and a bikini top to hit the shops may be accepted in your local town, not covering up abroad could get you arrested. Majorca recently introduced a bikini ban meaning tourists caught topless or wearing swimwear on the streets could be fined £500.
Last year, a tourist in Rome was chased and threatened by three street performers for not tipping them. While the men were rightly arrested over their behaviour, you might want to find out the tipping etiquette of the country you're visiting. But don't worry if you haven't mastered this as even our Prime Minister isn't the best holiday tipper. David Cameron was criticised for not tipping a waitress on holiday in Tuscany a few years back. Dave paid for his coffee with a 50 euro note but failed to leave any coins for the waitress. Embarrassing!
Most people like to relax with a drink on holiday but when you find yourself running through the streets naked or hanging off the hotel balcony, you know you've had too much. Drinks tend to be a lot stronger in other countries too and in some places the alcohol isn't even measured. A recent study by sunshine.co.uk found that 37 per cent of Brits have their first holiday tipple within an hour of checking in to their hotel.
We get that most tourists like their home comforts and slip a few tea bags in their hand luggage so they can sip a nice brew as they watch the sunset from the hotel balcony, but is it really necessary to pack a potato peeler and sardines? A British Airways survey found that other silly things holidaymakers pack for a holiday abroad are kettles, Marmite and tomatoes.
You don't want to be the tourist who damaged a 500-year-old sculpture so follow the 'Do not touch' rules. A Chinese tourist who etched his name on an ancient Egyptian monument last year caused outrage in China. The 15-year-old boy wrote 'Ding Jinhao wuz here' on the almost 3,500-year-old Luxor Temple. Then there was the time an American tourist visiting Florence's Museo dell'Opera del Duomo accidentally snapped a finger off a 600-year-old statue of the Virgin Mary. Patrick Broderick, 55, who happened to be a surgeon, was trying to compare his finger to one on the marble statue when it broke off. Cringe!
How difficult is it to remember to leave the animals alone? Some of the most embarrassing things tourists have done to local wildlife include riding manatees, getting drunk and charging at an elephant, manhandling a dolphin for a photo and even catching and cooking a rare octopus! The woman who thought it was a good idea to touch and ride a protected manatee in Florida was forced to hand herself in to police when photographs of her were taken. Luckily the harmless animal wasn't hurt, but the holidaymaker could have been locked up for 60 days.
Ivory, knock-off purses and exotic animals are some of the souvenirs that could land you in trouble at the airport. In 2012, a British holidaymaker was stopped at Cardiff Airport when she returned from a trip to Morocco with a handbag made from a WHOLE iguana. The bag, which included the animal's head and claws, was quickly confiscated by custom officers as iguanas are on a list of endangered animal skins and is illegal in Britain. Alex Lawther, assistant director of the Border Force in Wales, warned tourists about not buying animal skin bags at markets and bazaars on their exotic holidays. "My message to holidaymakers is simple - don't do it," he said. "At best, you will have these items taken off you and at worst you could face a criminal conviction."
Getting arrested while on holiday is one way to make a bad impression and it often happens when tourists don't make the effort to find out the local laws. A Foreign Office poll found that two thirds of Britons don't find out the laws of the country their visiting, putting themselves at risk. Wearing camouflage in Barbados, making satirical jokes about the Thai royal family and wearing a bikini in the streets of Barcelona are all crimes that could get you arrested.
Carrying a bumbag, wearing a visor and talking loudly are all signs that shout 'tourist'. Taking your behaviour down a notch and adopting a country's style with your clothing, will help you blend in. If you don't want to look like a typical tourist, you might want to avoid carrying your massive backpack everywhere and leaving the socks with sandals look at home.
Innocent hand gestures at home don't always mean the same abroad. For example, the okay sign with your thumb and forefinger are highly vulgar in Greece and Turkey. Be careful where you're pointing when asking for directions too as it's rude to point in so many countries that you may just want to use an open hand instead. And don't use the thumbs up sign in the Middle East as in many countries it means 'up yours!'
Up Next