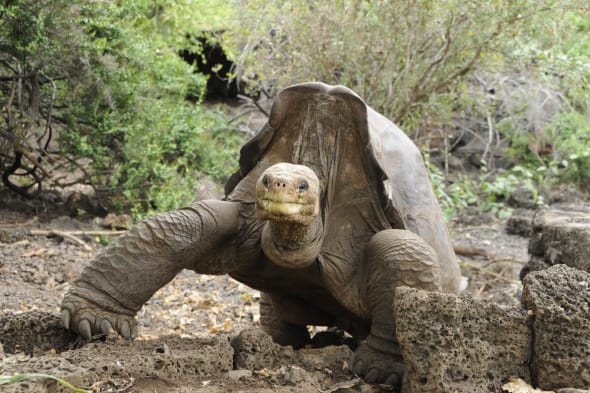 A gianttortoise subspecies that once teetered on the brink of extinction has made a big comeback on its Galapagos island home.

In the 1960s only 15 of thetortoises, which can weigh over 500lb, remained on the island of Espanola. They came close to being wiped out by ecological damage caused by feral goats introduced in the late 19th century.

Today, 40 years after captive-bredtortoises were reintroduced to the island by the Galapagos National Park Service, their numbers have grown to around 1,000 and they are breeding. Source: Press Association.

US conservation expert Professor James Gibbs, from the SUNY College of Environmental Science and Forestry in New York, said: "The population is secure. It's a rare example of how biologists and managers can collaborate to recover a species from the brink of extinction."

Prof Gibbs led a team of researchers that assessed thetortoise's progress using four decades of recorded data on the animals.

He stressed that while thetortoise population is stable more of the island's landscape still has to recover from the damage inflicted by the now-departed goats.

"Population restoration is one thing, but ecological restoration is going to take a lot longer," said Prof Gibbs, whose findings appear in the online journal Public Library of Science ONE.

Shrubs and small trees have grown to replace the grassy vegetation devoured by the goats. This hinders the giant tortoise's movement and the growth of cactus, a vital part of its diet.

Chemical analysis of the soil on Espanola shows a pronounced shift from grasses to woody plants in the last 100 years.

The shrubs and trees have also adversely affected the endangered waved albatross that breeds on the island, making it difficult for the ungainly sea birds to take flight.

Professor Gibbs said: "This is a miraculous conservation success accomplished by the Galapagos National Park Service, but there is yet more work to fully recover the ecosystem upon which thetortoises and other rare species depend."

Video: diving off the Galapagos islands

This image, entitled 'It's only a Game' by Neil Aldridge, won the Documentary Series category.

Sixteen-year-old Oliver Wilks won an award in the youth section of the Wildlife photography awards for this amazing image.

Andrew Parkinson won the Animal behaviour category for this image.

The wildlife on video category was won by Mark Sisson who filmed a great crested grebe family.

This image, taken by Richard Shucksmith, won  top prize at the British Wildlife Photography Awards 2011. Greg Armfield, Photography and Film Manager from the World Wildlife Fund, said: 'A truly beautiful shot of a jellyfish that perfectly captures its iridescent colours and magical qualities. All the more remarkable that it exists in UK waters. Fantastic.'