Audi reveals most powerful R8 ever 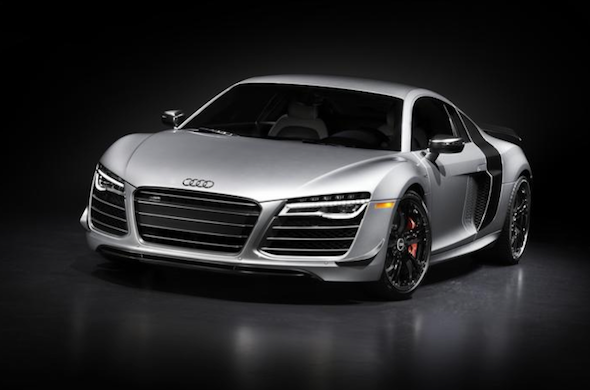 This is the Audi R8 Competition; the latest version of the brand's supercar, which has been unveiled ahead of its debut at the Los Angeles motor show later this month.
Billed as something of a last hurrah for the current R8, which is due for replacement, the Competition is being described by the German brand as the "most powerful Audi production vehicle to date."

Giving credibility to that claim is the car's mid-mounted 5.2-litre engine, which has been fettled to produce a muscular 570bhp. Mated to the familiar seven-speed twin-clutch S tronic gearbox and Quattro four-wheel-drive system, this V10 motor is capable of getting the Competition from 0-62mph in 3.2 seconds.

Its top speed is a claimed 199mph, a figure that makes the Competition the "fastest R8 ever offered", according to the brand.

Visually, the Competition takes inspiration from its racing sibling, the R8 LMS, which has gone on to dominate GT3 racing. Unique styling features include matte carbon fibre on the front spoiler, side blade, front bumper dive planes, mirror caps and rear spoiler. Gloss black paintwork has been applied to both the alloy wheels and sports exhaust tips. Standard fit carbon ceramic brake discs are sheathed by red brake calipers.

The cabin exhibits similarly liberal use of matte carbon fibre trim, while those wanting a bit more bling will be pleased to see the door sills have been finished with illuminated 'R8 Competition' logos.

If you fancy one, you'd better be snappy – and live in America. The R8 Competition will be offered in a strictly limited production run of 60 units, and will be sold exclusively in the USA. Order books open next month, with the first deliveries expected early in 2015.

Audi reveals most powerful R8 ever
Up Next