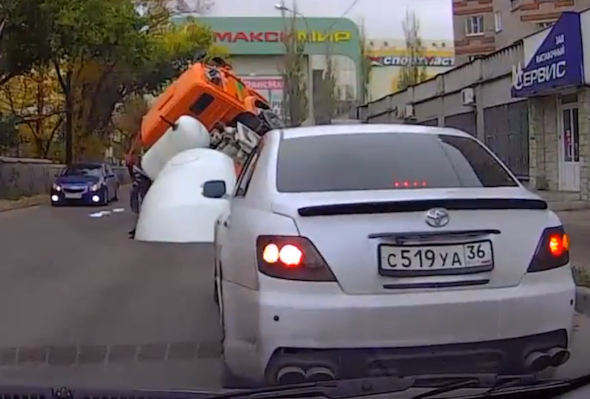 As you are no doubt aware – thanks to the constant onslaught of dash cam videos emerging from the country – Russia can be an extremely hazardous place to drive. Whether it's adverse weather, rampaging wildlife or just the insanity of fellow road users, there are many dangers waiting to pounce on the unsuspecting Russian driver.
Surely, picking the right vehicle can help though? Driving along in a huge, weighty 4x4, or better yet a full-sized lorry, means you're less likely to be injured or punted off the road, should the worst happen.

Try telling that to the hapless cement lorry driver in the clip below, however. Captured on the dash cam of a following car, this giant piece of plant machinery meanders slowly through a gloomy suburb, with the driver no doubt satisfied that he's not going to come into any bother.

But this is Russia, and you can't relax just because there's nothing on the road to cause a problem, for the road itself could pounce without warning. And so it happened to the cement lorry driver, whose vehicle disappears into a sinkhole beneath the Tarmac, almost being swallowed whole.

Thankfully the driver manages to exit the lorry without injury, though it's likely he's going to have some explaining to do to his insurers.