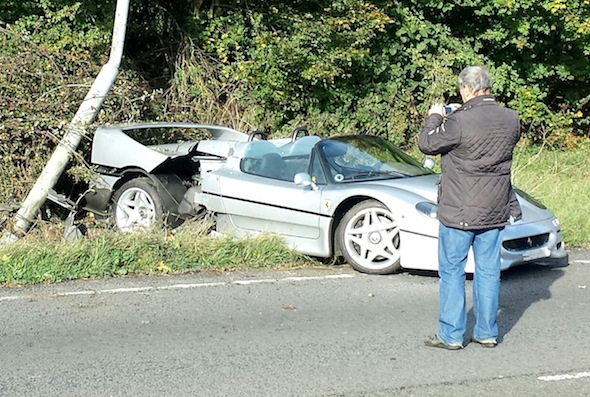 A Ferrari F50 driver lost control of his vehicle on Wednesday, causing what is expected to be one of the most expensive single-vehicle crashes ever seen in the UK.
The unidentified driver spun his silver two-seater on the A43 near Brackley, and collided with a lamppost, resulting in significant damage to the engine bay and rear bodywork.

The car's insurers are no doubt bracing themselves for a significant repair bill. Just 349 examples of the F50 – then the most advanced Ferrari road car ever – were made, and tidy examples currently change hands for around £850,000, with prices steadily rising.

The F50 was launched in 1995 to celebrate the 50th anniversary of Italy's most famous automobile manufacturer. It was fitted with a 4.7-litre V12 engine, which was loosely related to the one used in Ferrari's F1 race cars. Developing 520bhp, the motor enabled the F50 to get from 0-62mph in 3.6 seconds and on to a top speed of 202mph – incredible today, never mind 19 years ago.

This latest crash is though to be the most expensive accident in the UK since comedian Rowan Atkinson crashed his McLaren F1 in 2011.

Witness Seamus O'Brien, who was one of the first at the scene, told ITV News: "I was driving on the A43 near Brackley and saw the Ferrari wrapped around the lamppost.

"There was a chap wearing a Ferrari T-shirt stood besides another chap and another car had put its hazard lights on to block the lane which was 50 yards off the westbound roundabout."

A Police spokesman said: "We were called at 11.11am on Wednesday morning to reports a silver Ferrari was involved in a collision with a lamppost.

"The lamppost and the car were damaged, but there were no injuries."
Tags
Read Full Story Click here to comment