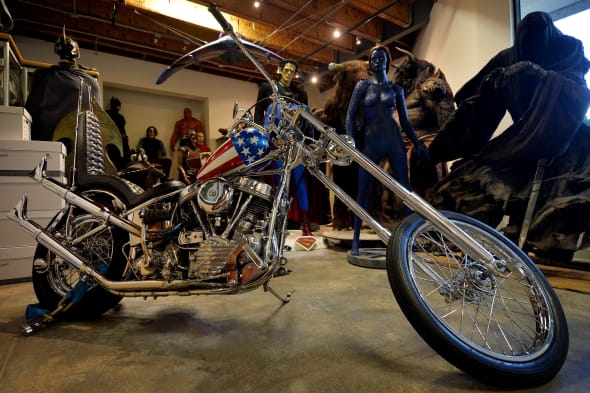 A custom chopper-style motorcycle, which apparently starred in 1969 film Easy Rider, has been auctioned for $1.35 million (£838,821), despite claims that the bike is not the genuine article.
The Harley Davidson was reportedly used in a climactic crash scene in the movie and then later restored by actor Dan Haggerty.
However, another collector, who claims he owns the real bike that was used in the movie, has called the authenticity of the bike into question. Despite the doubts cast over the motorcycle's history, the Californian auction house that sold the bike - Profiles in History – said this didn't affect interest in the bike and described the bidding as "fierce".

Gordon Granger, a collector from Texas, claims he has a certificate, signed by Grizzly Adams star Dan Haggerty; proving his bike is the genuine article, reports the BBC.

Dan Haggerty, who had a small role in the movie, which is now considered a cult classic, admitted to the LA Times he had authenticated and sold two "Captain America" bikes. However, he insisted that only one of them was genuine - the one belonging to California real estate agent Michael Eisenberg that was sold on Saturday.

Eisenberg bought the bike in 2014 from another man who had purchased it from Haggerty 12 years earlier. It bears the signature of another actor in the film, Peter Fonda, on its teardrop-shaped fuel tank, though he too has queried its validity.

"There's a big rat stinking someplace in this," the 74-year-old actor is quoted as saying by the LA Times.

"I can't tell you which one is real, I know there are two bikes out there that are both authenticated by Haggerty. That's not right."

Decorated with the American flag, the bike sold on Saturday features a forward-angled front wheel and handlebars and fishtail exhaust pipes. Prior to being auctioned off, the chopper previously spent 12 years on display at the National Motorcycle Museum in Anamosa, Iowa.
Tags
Read Full Story Click here to comment