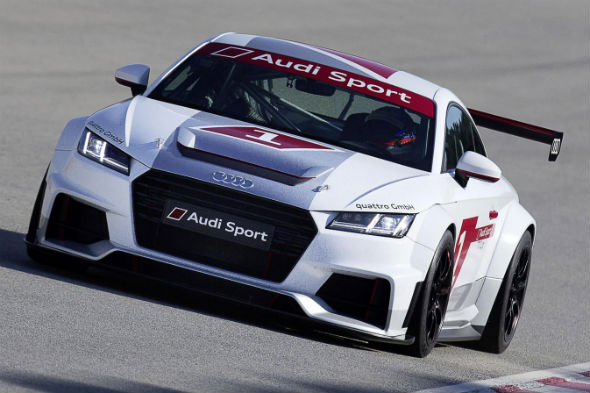 Audi have announced the release of a racing version of the TT, dubbed the 'TT Cup', which will take part in a championship of the same name in 2015, supporting the DTM (German Touring Cars), across six rounds.
The track-ready TT Cup will feature a 2.0-litre turbocharged engine packing 306bhp and mated to a six-speed DSG gearbox – which have both been carried across largely unchanged from the road legal TT S.

However in its stripped-out racing state the TT Cup weighs just 1,125kg – considerably less than the road car's 1,460kg kerb weight. Additionally, a 'push-to-pass' function has been added and unleashed another 30bhp, which combined with the weight saving should noticeably liven up the car. A total of 24 TT Cups will be prepared for each round, with the grid comprising six 'changing guest drivers' and 18 private racers.

When asked about the new track-ready TT Cup, Audi's research and design chief Dr Ulrich Hackenberg said: "For me it was clear that a driving machine like the new Audi TT belongs on the race track as well...The TT is going to thrill fans and drivers".

News of this dedicated track edition of the TT has led to a lot of speculation online, with many Audi fans asking if a similar road legal version of the Cup will be made available to the general public. Judging by the reaction of Audi fan boys and guys alike, we don't doubt that there would be a significant level of interest in a stripped-out, lightweight TT – should the company decide to build one.

​Audi to launch new racing series for TT
Up Next