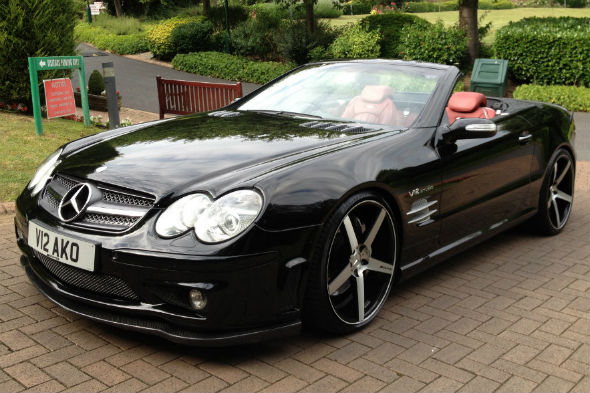 Boxing star Prince Naseem Hamed is known for his taste in Mercedes, after he notoriously trashed a £300,000 McLaren Mercedes SLR in a 90mph crash back in 2005. However, the car that is now up for sale is the slightly more modest SL55 AMG that he used to own – albeit one adorned with fake SL65 and V12 biturbo logos. And the price for the former World Featherweight champion's wheels? That'll be £20,995, please.
Despite the wannabe-SL65 badges, this SL is no featherweight itself, with a supercharged V8 powerhouse under the bonnet, pumping out 500bhp and firing the hefty Merc to 62mph in just 4.7 seconds. And this Hamed-spec SL is not scared of shouting about the power within – thanks to its gleaming black paintwork, 20-inch five-spoke alloy wheels and a lurid red leather interior.

This 2003 convertible supercar has covered just 56,000 miles, has a full service history and comes HPI Clear, though the ad is clear to state that the – untrue – 'V12' number plate is not included in the sale. What you do get with the car, however, is climate control, sat nav, rear parking sensors, electric seats, xenon headlights, an SL65 front bumper and traction control – crucial with 500bhp of German muscle on tap.

"One careful owner" may not be the case with this car – bearing in mind Hamed's history behind the wheel of another powerful Mercedes – however, anyone who wants a menacing Merc with a few choice mods to cruise around town in, get your credit card at the ready and head over to the SL ad.

​Boxing legend's Mercedes SL up for sale
Up Next