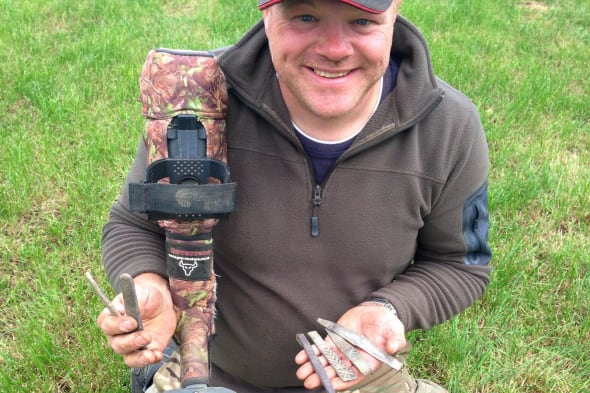 A hoard of Viking treasure has been unearthed by a metal-detecting enthusiast in one of the most significant finds of its kind ever made in Scotland.

More than 100 objects, some of them made of gold, were discovered on church land at an undisclosed location in Dumfries and Galloway.

The "historically significant" find was made by Derek McLennan, 47, a committed metal detector user who had been searching the area for the last year.

The rich hoard of artefacts, many of which are unique, includes some of Carolingian (west European) and Irish origin. The material comprises many silver ingots, armbands and brooches, as well as several gold objects, Scotland's Treasure Trove Unit announced. Words: PA

The hoard also includes a complete metal vessel containing more objects. It has not yet been emptied and the first step will be to examine its contents by x-ray techniques.

Experts at the unit described the find as "one of the most significant Viking hoards ever discovered in Scotland".

Head of the Treasure Trove Unit, Stuart Campbell, who is overseeing assessment of the hoard, said:
"This is a very important and significant find and has required the close cooperation of Historic Scotland with Treasure Trove Unit and National Museums Scotland staff to recover the fascinating items it contains.

"Due to the quantity and variety of the objects, and the importance of the find overall, it will take some time for experts to assess the hoard as a whole so that we can appreciate its true significance. We look forward to learning more." 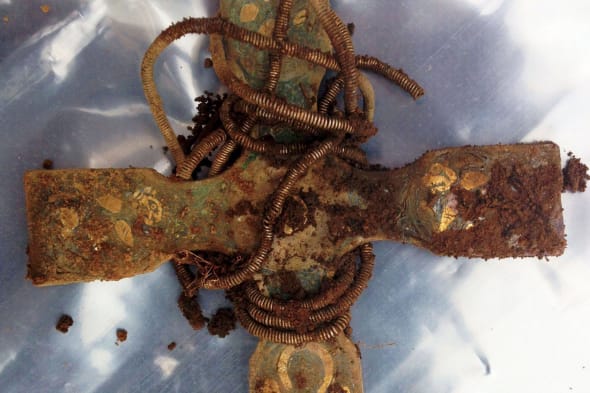 The Church of Scotland, on whose land the discovery was made, said an early Christian cross thought to date from the 9th or 10th century was among the objects unearthed.

The solid silver cross has enamelled decorations which experts consider to be highly unusual.

Mr McLennan found the cross among dozens of silver arm rings and ingots some 24 inches (60 centimetres) below the ground - well beyond the depth his machine should have been able to register.

When the hole was fully excavated, Mr McLennan picked up another signal at its base. Further digging
revealed a second level hoard of even higher quality, the Kirk said. That find included what is possibly the largest silver Carolingian pot ever discovered, with its lid still in place.

The pot is likely to have been around 100 years old when the hoard was buried in the mid 9th or 10th centuries.

Mr McLennan said: "We still don't know exactly what is in the pot, but I hope it could reveal who these artefacts belonged to, or at least where they came from." 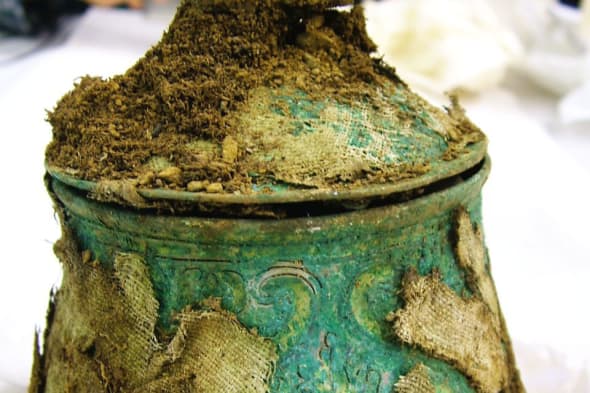 When the discovery was made in early September, he was in the company of two ministers who are also detectorists; Rev Dr David Bartholomew, a Church of Scotland minister of a rural Galloway charge, and Mike Smith, the pastor of an Elim Pentecostal Church in Galloway.

The hoard falls under the Scots law of treasure trove, and is currently in the care of the Treasure Trove Unit. The law provides for a reward to be made to the finder which is judged equivalent to the market value of the items.

The Kirk said its General Trustees, as the landowners, have reached agreement with Mr McLennan about an equitable sharing of any proceeds which will eventually be awarded.

Secretary to the General Trustees, David Robertson, said: "We are very excited to have been part of such an historic find and we commend Derek for the spirit in which he has worked with us and the other agencies involved in making sure everything is properly registered and accounted for. Any money arising from this will first and foremost be used for the good of the local parish." 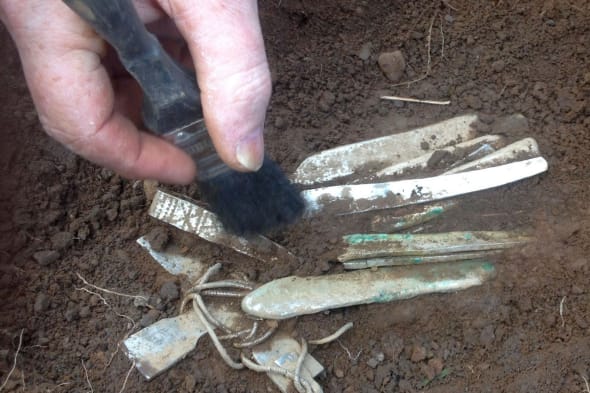 Mr McLennan is no stranger to finding treasure, having been part of a group which discovered more than 300 medieval silver coins shortly before Christmas last year.

Scotland's Culture Secretary Fiona Hyslop said of the latest find: "The Vikings were well known for having raided these shores in the past, but today we can appreciate what they have left behind, with this wonderful addition to Scotland's cultural heritage.

"It's clear that these artefacts are of great value in themselves, but their greatest value will be in what they can contribute to our understanding of life in early medieval Scotland, and what they tell us about the interaction between the different peoples in these islands at that time.

"The Dumfries hoard opens a fascinating window on a formative period in the story of Scotland and just goes to show how important our archaeological heritage in Scotland continues to be."

No, it's the Vale of Glamorgan, Wales

Wales has a number of working vineyards and Llanerch Vineyard, located in the heart of the Glamorganshire countryside, is particularly picturesque. At first glance, the working vineyard appears as a scene straight out of France or even Australia. The site also holds a restaurant, bistro, boutique hotel and cookery school.

No, it's in Cardiff, Wales

Nineteenth century high gothic Castell Coch was built when 'eccentric genius' William Burges was given free rein by his paymaster, John Patrick Crichton-Stuart, the third marquess of Bute, to create a rural retreat to complement his main residence, Cardiff Castle. He didn’t hold back and created the fascinating residence, reminiscent of a Polish castle, with dazzling ceilings and over-the-top furnishings.

No, it's Liverpool, England

Chinatown in Liverpool is home to the oldest Chinese community in Europe and features the largest, multiple-span arch of its kind outside of China. Located near Liverpool Cathedral, Chinatown has an array of reputable Chinese restaurants, Chinese takeaways and a huge selection of Chinese groceries from many Chinese supermarkets.

No, it's Gwynedd, Wales

Portmeirion was designed in the style of a rustic Italian village in 1925 by Sir Clough Williams-Ellis, who wanted to show how a naturally beautiful site could be developed without spoiling it. The village was built as a place where events, concerts and exhibitions could take place, with 70 acres of exotic woodlands and coastal walks surrounding it.

No, it's Barra, Scotland

Beautiful Barra is the most southerly of the inhabited islands in the Outer Hebrides and boasts Caribbean-like beaches and waters.

No, it's the West Highlands of Scotland

A ride across the Glenfinnan Viaduct will make you like you’re in the magical world of Harry Potter as you cross the viaduct on the steam train. Built entirely out of concrete, the viaduct has 21 arches and is 30 metres high, offering breathtaking views over Lochaber’s Loch Shiel.

No, it's London, England

Piccadilly Circus is one of London's most iconic sites with its famous advertising hoarding, statue of Eros and many shops. The busy junction is popular with tourists who like to stop and take photos in front of the illuminated adverts, similar to those in the brightly lit Times Square in New York.

No, it's Brighton, England

The Royal Pavilion in Brighton is an exotic palace built for the Prince Regent, later King George IV, between 1787 and 1823. The extravagant building was heavily influenced by Chinese and Indian architecture of the time is as impressive inside as out and reflects the vibrancy of Brighton.

No, it's Cornwall, England

Looks just like an ancient Greek site overlooking the Aegean, right? Cornwall's Minack Theatre is an open-air theatre, where stone arches are used as scenery and the sea as the backdrop. The cliffside theatre in Porthcurno hosts summer shows and features landscaped gardens with stunning sea views for day visitors.

No, it's Cumbria, England

This epic wall built by the Roman Emperor Hadrian in AD122 took soldiers six years to complete and is 73 miles long from sea to sea. Hadrian's Wall is surrounded by wild countryside and scattered with Roman forts, temples and milecastles. The wall, along with the Great Wall of China, was declared a World Heritage Site in 1987.