Marussia to enter one car at Sochi GP 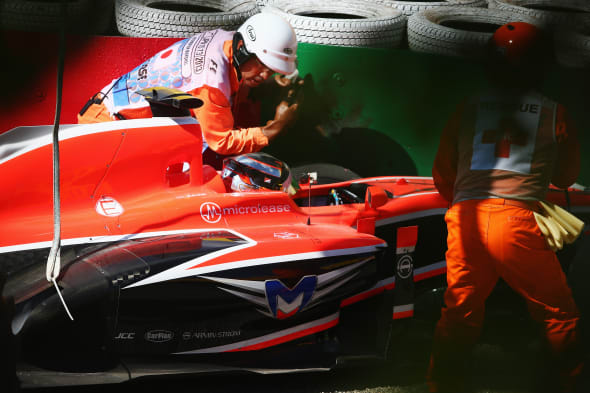 F1 team Marussia is to field just one of its two cars at this weekend's inaugural Russian GP, out of respect for its critically injured driver, Jules Bianchi.
The Russian backed team made the announcement this morning before the start of the first free practice session at the first ever race in the southern resort of Sochi.

It was thought that American reserve driver Alexander Rossi would take Bianchi's seat this weekend, particularly as the second car was being prepared for the race. However, Marussia has apparently backtracked on this plan, leaving Max Chilton to represent the team alone.

The Guardian reports that Marussia will not be penalised for not running both cars, in light of the circumstances.

Bianchi remains in a critical condition in hospital following brain surgery for his life-threatening head injuries, suffered in a horrific smash at last weekend's Japanese Grand Prix in Suzuka.

The Frenchman lost control in the torrential downpour that marred the race, and crashed at high speed into a recovery vehicle that had been dispatched to rescue fellow racing driver Adrian Sutil.

In a statement, the team said: "The Marussia F1 Team will run a single car for the duration of the forthcoming grand prix weekend in Sochi out of respect for their driver Jules Bianchi, who remains in hospital in Yokkaichi, Japan, in a critical but stable condition.

"The team have written to the stewards of the meeting to inform them they have withdrawn their second car.

"Notwithstanding the presence in Sochi of Alexander Rossi, the nominated official reserve driver for the 2014 Russian Grand Prix, the team feels strongly that fielding a single car, that of driver number four, Max Chilton, is the appropriate course of action under the difficult circumstances of the weekend.

"Jules' car crew have built a second car, which has been scrutineered and is ready to race, and this will remain on his side of the garage throughout the weekend.

"In support of Jules and his family, the team and their cars will carry the familiar '#JB17' graphic, to ensure that although Jules is not with them in Sochi this weekend, he is, nonetheless, racing on with the Marussia F1 Team."
Tags
Read Full Story Click here to comment