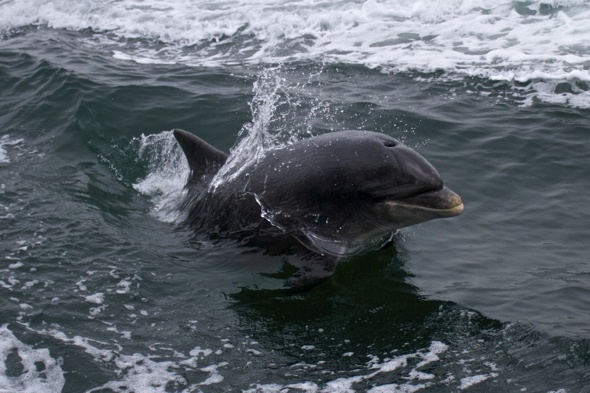 Five swimmers had to be rescued when they were attacked by a dolphin in Ireland.

A member of the public raised the alarm with the Irish Coastguard, who asked Galway Lifeboat for assistance.

Witnesses said the dolphin had circled the swimmers and then swam at them in an intimidating manor.

When the Galway Lifeboat arrived on the scene a fishing vessel had managed to separate the dolphin from the swimmers.

The swimmers were taken to shore after the incident off Blackrock Tower at Salthill, Galway, on Wednesday evening.

According to the Mirror, the swimmers were very shaken by the incident but did not require medical assistance.

Galway RNLI told the BBC: "The lifeboat joined the fishing vessel in keeping the dolphin away from the swimmers until they made it safely ashore.

"Reports from people who witnessed the incident say the dolphin had circled the swimmers then swam at them in an intimidating way and glancing off them, coming and going, with his tail and nose.

"The swimmers were very shook up by the incident and one in particular was very shocked but did not require medical assistance."

Mike Swan, Operations Manager at Galway Lifeboat Station said that it was a highly unusual incident.

Speaking to thejournal.ie, he said: "This is the first time we've been called out to aid swimmer coming under – I don't know if you'd call it an attack, but the dolphin was definitely corralling and slapping them."

Five swimmers 'attacked' by dolphin in Ireland
Up Next