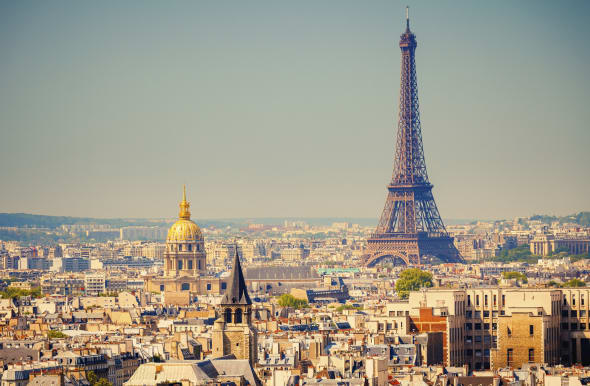 Tomorrow sees the opening of one of the most important events in the automotive calendar: the Paris Motor Show. AOL Cars will be on the ground as soon as the doors open, reporting live on all the new product unveilings and getting the inside line from the industry's top bods.
With new models from Audi, Jaguar, Ford, Mercedes-Benz and many more, there is plenty for car buyers to get excited about. As is the motor show norm, expect the show stands to be sprinkled with a liberal helping of futuristic concept cars, giving a hint as to the future of your favorite marques.

Keep tuned for our live blog from tomorrow morning. For now though, here is what we are most looking forward to seeing in the metal.

It wouldn't be a motor show without a brand new sports car for everyone to drool over. Mercedes' performance division AMG has chosen Paris to give its new baby its first public airing. The AMG GT is a replacement for the sublime SLS, and in typical AMG style, features a large (4.0-litre) V8 engine and an exhaust note to wake the dead. It goes on sale early next year, priced from around £95,000.

At the more affordable end of the performance scale – though arguably just as visually arresting – is the new Honda Civic Type-R. While it is officially still just a design concept for now, expect this car to be a fairly accurate representation of what the new hot hatch will look like when it reaches UK showrooms next year. Expect a 2.0-litre turbocharged engine and around 300bhp from this winged monster.

For most, low-slung performance machinery will be little more than eye-candy, with the real world demands of budgets, children and everyday driving, demanding a thoroughly more practical vehicle. Thankfully, Ford is on hand with its brand new S-Max seven-seater, to prove that family motoring needn't be dull. Starting from around £25,000, this handsome people carrier will eventually be available in Ford's exclusive 'Vignale' trim when it goes on sale next summer.

Premium Japanese marque Infiniti has struggled in Europe against its established German rivals, but it is hoping this swoopy four-door coupe will change all that. This design study previews a forthcoming flagship model for the brand, which will go head-to-head with the likes of the Porsche Panamera and BMW M6 Gran Coupe. Expect to see it on the roads by 2018.

Arguably one of the most important cars at Paris, the XE is Jaguar's long-awaited return to the compact saloon sector. Powered by a new range of 'Ingenium' engines and constructed from a cocktail of lightweight alloys, the XE is in prime position to steal sales from BMW and Audi when it goes on sale in the New Year. Oh, it's something of a looker, too.

Mazda hasn't messed about with its hugely successful sports car formula, and so the new Mazda MX-5 will still be rear-wheel-drive and feature a folding roof. It'll be offered with a choice of two petrol engines featuring Mazda's efficiency-boosting SkyActiv technology. Expect it to become an instant hit with keen drivers and value-conscious sun-seekers alike.

A Skoda supermini might not seem like something to get excited about, but given the strides made by the Czech brand under Volkswagen ownership, we'd wager the Fabia will cause chiefs at Ford and Vauxhall to have sleepless nights when it goes on sale early next year. As well as the usual improvements to quality and refinement, a new ultra-frugal model will be offered, capable of returning a claimed 91mpg.

Another manufacturer determined to upset the status quo is Volvo, which has moved its new XC90 upmarket, getting in the face of premium SUV manufacturers Land Rover and BMW. Aside from being the best looking Volvo in ages, the new XC90 features a raft of safety technology, which will not only look after you and your loved ones, but any unfortunate pedestrian or cyclist who's meandered into your path. It'll be outside a school gate near you from May.

With most manufacturers sinking millions into the development of electric vehicles and alternative powertrains, it's heartening to see a manufacturer who simply doesn't have to bother. Instead, Bentley have simply turned the wick up on its flagship Mulsanne limousine, to create this new Speed edition. Now boasting 530bhp from its 6.75-litre turbocharged V8 engine, the 2.7-tonne Mulsanne Speed will crack the 0-60mph sprint in 4.9 seconds. If you need to ask how much, you can't afford it.

If you happen to be at the Paris show, head over to the Ferrari stand and take a look at the new 458 Speciale A, as you're unlikely to ever see one on the road. Only 499 of these convertibles will ever be made, making it as rare as Ferrari's current flagship hypercar, the LaFerrari. It's powered by a 597bhp, 4.5-litre V8 engine, and will crack the 62mph in just 3.2 seconds, all the while singing the song of thoroughbred Italian speed through its exhaust pipes.
Tags
Read Full Story