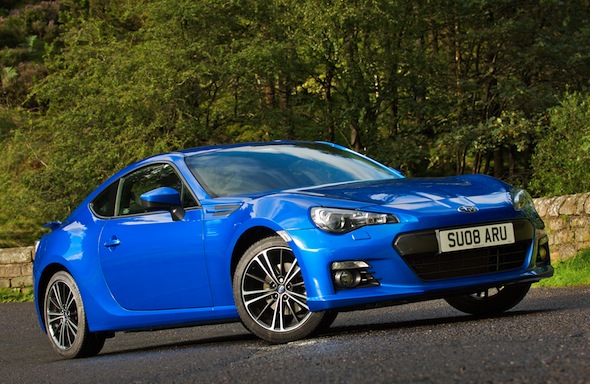 Depending upon your outlook, the Subaru BRZ is a re-badged Toyota GT86, or the GT86 is a re-badged BRZ. But whichever way you look at it, the fact remains that the BRZ and GT86 twins are more Subaru than Toyota. The former is in charge of producing, testing and fine-tuning the jointly developed, two-door, rear-wheel-drive sports car after all – and it uses a Subaru boxer engine. But it remains a rare sight on UK roads with the Toyota version basking in the fine words the media has lavished on the back-to-basics sports car, and consequently it has sold more healthily than the Subaru version – the ratio is about 10:1 in the GT86's favour. Apart from a few visual differences on the inside and outside, they are set up slightly differently but you'd be very hard-pressed to notice.
What's under the bonnet?

Subaru's 2.0-litre, four-cylinder boxer engine as used in the Impreza hatchback no less. However, without that car's turbocharger, there's a modest 197bhp on tap, though 60mph comes up in 7.4 seconds thanks to a low kerb weight of 1,230kg. But to get any meaningful driving thrills, you'll be revving the proverbial nuts off of it. It sounds fruity at idle and roars when the needle spins toward the red part of the rev counter, but it gets wearing after a while. 197bhp isn't a lot and for many people that sort of power figure just won't be enough to interest them – especially when you consider that for the most part, the engine's torque delivery is flat and only delivers when you head towards the rev limiter. Again, it depends upon your viewpoint; if you like low-powered sports cars that are about handling rather than raw power, the BRZ will delight. If not, you'll be left wanting.

Just last month, Subaru brought the BRZ within easier reach of more buyers by re-introducing the entry-level SE version. Priced at £22,495, the BRZ SE comes with keyless entry and push-button start, dual-zone climate control, cruise control, sports seats and a limited slip differential. SE Lux tops the range at £23,995 (after a £2,000 price cut earlier this year) and adds heated leather and alcantara sports seats. There's a choice of a six-speed manual gearbox or an auto for £500 more with steering wheel-mounted paddle controls.

The cabin is nicely designed – apart from a decidedly 1980s-looking digital clock – but poorly finished in some areas, and Toyota's Touch and Go multimedia system is by far a better and slicker system to use than Subaru's nasty Pioneer unit (which is, thankfully, an optional extra). It took nearly 10 minutes to hook up an iPhone and refused point-blank to stream music via Bluetooth.

Well, obviously there's the GT86 but it costs from £25,110 – and it's difficult to see why it is so much more expensive. There's a raft of rivals – from Mazda's MX-5 Roadster Coupe to the Volkswagen Scirocco, which claim to offer the last word in driver thrills. However, it's only the Mazda that could be considered to be on terms to the BRZ's low weight, low power philosophy.

Road test: Subaru BRZ
Up Next

Only by testing the BRZ back-to-back with the GT86 would you notice the firmer suspension settings. It obviously means BRZ drivers suffer more on UK roads as there's no doubt the car has a harsher ride, but it does change the way the car drives. There's slightly less understeer as found with the GT86, but both cars can be neatly put back into line by prodding the throttle and get the rear sideways. This delightful handling coupled with the slick six-speed manual gearbox and precise steering make driving the BRZ a sheer blast.

If you hanker after the good old days of sports cars, you'll love the BRZ. It has a lovely innocence about it which is infectious and can make you overlook the car's, albeit small, flaws. We would choose it over the GT86 due to its relative rarity and for the fact that it can be specified in Subaru's iconic World Rally Blue Mica paint finish. That price difference would be enough for us to take the plunge, even if the multimedia system is plain dreadful.