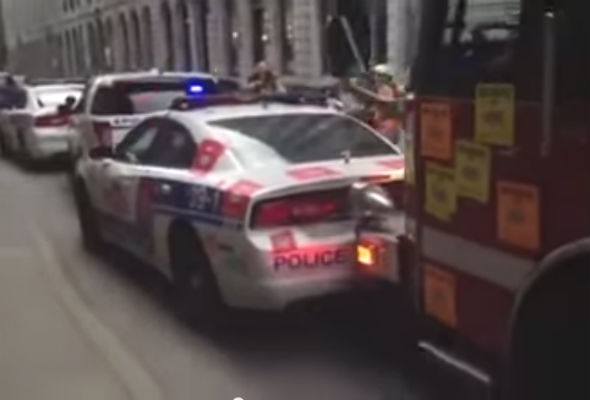 Fire fighters have a challenging job, trying to race huge fire engines – complete with several tonnes of water sloshing around – along tight city streets, all before actually facing any blaze. This becomes even more difficult when even the police are blocking your path with their abandoned cars.
The person driving the fire engine in this clip filmed in Montreal, however, doesn't let the mere matter of three police cars – or a parked BMW 5 Series for that matter – get in their way, choosing to shunt the police cars out of the way instead.

While the police cars seem to survive mostly unharmed, the BMW is not so lucky, as the passing fire engine rips the front bumper off when squeezing past.

Thankfully the BMW owner should receive compensation from the city of Montreal, reports Car Throttle. As for the bruised police cars, we're sure that these vehicles face worse ordeals than this every day on the streets.

Watch the scene unfold in the video below:
Tags
Read Full Story