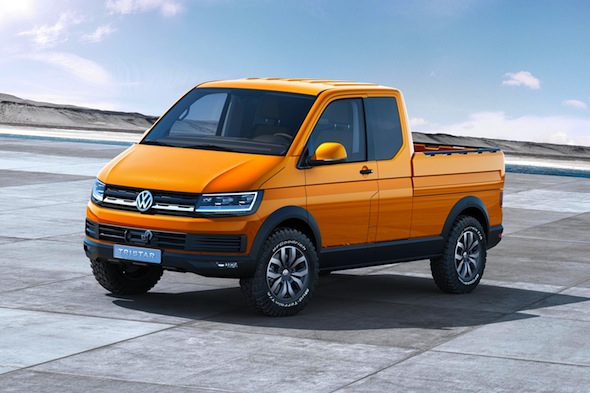 It's not just car drivers that manufacturers attempt to impress with outlandish concept models. Destined to wow the crowds at the IAA commercial vehicle show in Hannover this week is this, the Tristar Concept from German manufacturer Volkswagen.
VW has a rich history in commercial vehicles and has garnered itself something of a cult following with its range of Transporter vans. This Tristar Concept offers a teaser of what future generations of the model will look like.

Looking like a well executed cut-and-shut of a van and a pickup truck, the Tristar Concept is designed to be "multifunctional like a Swiss Army knife" and be an "adaptable, reliable all-rounder", according to its maker.

As such, it packs in much of the technology currently available on the Transporter range, including an extended cab, short-wheelbase configuration and permanent four-wheel-drive with rear differential lock. Ground clearance has been raised 30mm over the standard Transporter for greater off-road ability.

The Tristar borrows much of its styling from the current Transporter, though the overall design has been tweaked for a fresher look. The wraparound lines of the grille and bumper, in conjunction with full LED headlamps, bring this van's design bang up to date.

At the other end there is a double load space, with a dust and waterproof drawer under the rear flatbed, alongside a full-size spare wheel.

Inside, the moveable seats are trimmed in soft brown leather with contrasting orange accents – worlds away from the cement-flecked grey cloth most regular Transporter drivers will be used to.

Even more removed from the reality of white van man, the Tristar is decked out with an espresso machine and 20-inch tablet table, designed for video conferencing.

Under the bonnet VW's familiar 2.0-litre TDI diesel engine, developing 201bhp. Mated to a seven-speed DSG automatic gearbox, it is capable of whisking this mad creation up to a top speed of 115mph.

Dr. Eckhard Scholz, Chairman of the Board of Volkswagen Commercial Vehicles, said: "The Tristar combines elements of yesterday and tomorrow. On the anniversary of the first Syncro concept car, it strikingly highlights the company's all-wheel drive expertise and demonstrates its future viability.

"We take the needs of our customers seriously and are continuing to develop our best-seller with great purpose. We are therefore redefining the benchmark of the class with each and every new model."

VW Tristar Concept to wow at IAA
Up Next