Millionaire gives fortune away after wife survives cancer: then they split up 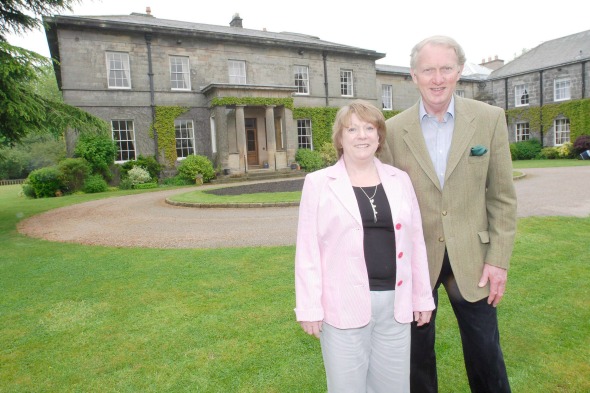 Brian Burnie, a 70-year-old millionaire who had made a fortune in recruitment, was so grateful that his wife had survived breast cancer that he set up a charity to help cancer patients. However, while it's not unusual for the family of sufferers to want to do their bit, Burnie took it to extremes. And in the end the marriage didn't survive the changes.

Burnie's story will feature on the Channel 4 documentary, Jon Richardson Grows Up, tonight. He had made his fortune building a recruitment business, then he bought a mansion, which he transformed into a £16 million luxury hotel and spa. His business success brought him, his wife and their three children financial security, and they were very comfortable.

Devoted to charity
However, after his wife was diagnosed with cancer in 2009, he decided to devote everything to helping other cancer patients. He sold the hotel and many of their possessions, and used much of the proceeds to buy cars to help patients from isolated rural areas get to hospital.

The family initially moved into a tiny rented terraced property - before buying another smaller home. Then in 2012 he went even further and sold the family home - donating that money to the charity.

The documentary doesn't delve into his personal life, but the newspapers have. The Daily Mail spoke to his wife, who said the couple had divorced in 2012. She told the newspaper that the charity had come to dominate her husband's life and that "I didn't intend to have to beat cancer and then spend the rest of my life living in a house like this and doing everything for everyone else." "I didn't want to give everything away. We needed a home and an income and we have three children. I wanted security for us and our family."
%VIRTUAL-ArticleSidebar-family-stories%

The Telegraph also spoke to her, and she highlighted that his devotion to the charity also meant she was hardly seeing him at all.

Burnie now lives off his pension, and drives a Ford Fiesta. He has said that after his death he won't leave any money to his children - but will give it all to charity.

Gave it all away
He's not the first to decide to give away a surprising fortune. Last May Tom Crist, a 64-year-old from Canada, announced he would give away every penny of his $24.5 million lottery win. The retired chief executive said he already had enough money to be comfortable, so would give the rest away to cancer charities - starting with the hospital where his late wife had been treated.

In Russia, Yevgeny Pushenko made a fortune running a cloth factory in the 1990s. However, he decided it didn't make him happy, so he handed it over to friends and became a monk. He completed a pilgrimage to Jerusalem on foot, and then retired to a monastery in Greece.

But perhaps the most unusually generous was Zell Kravinsky, who made a fortune in Pennsylvania real estate, but gave all $45 million of it away. He then decided that giving money wasn't enough and he gave his kidney to a stranger. This was almost the last straw for his wife, who only promised to stay (along with their four children) if he stopped giving body parts away.

Philanthropy on AOL Money
Philanthropist of the Year award given to Tony Blair: why?
Ice bucket challenge: the financial impact
33-year-old pledges chastity for a year to raise £27k for charity