Illegal immigrant clings to camper van from Calais to Kent 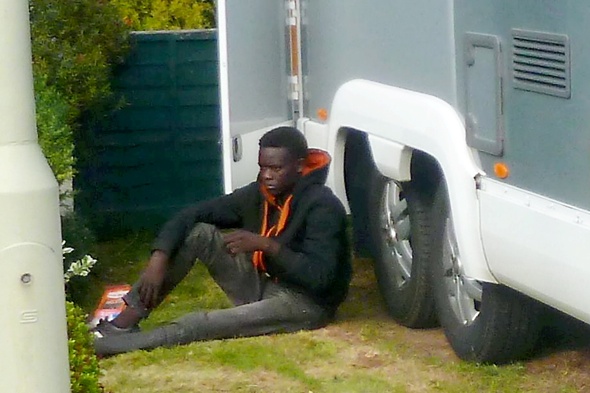 A father and daughter had a shock when they returned their rented motorhome from a holiday in Europe - and an illegal immigrant crawled out from underneath onto the driveway.

Paul Coles and his daughter Joanne, 22, had hired the Swift Kontiki for a motorcycling tour of Andorra.

They rented the camper van from Teresa Tyrer and dropped it off at her home in Ashford, Kent, on Monday.

But as they started to unload it, the man crawled out from underneath.

According to the Daily Telegraph, Mr Coles said he must have tied himself to the chassis, adding: "I would imagine it would have been in Calais at the tunnel car park because we didn't stop anywhere prior to that.

"It was a bit of a shock. We were unloading and suddenly this face appears between my legs.

"He must have tied himself on because I don't think he could cling on for that long."

Ms Tyrer said she felt sorry for the man who was not aggressive and who looked "shaken" as he emerged.

Mr Coles gave him a sandwich and some water as she called the police and said the man just waited for them to arrive and wept as he was taken away.

According to Kent Online, she said: "All of a sudden a hand appeared from underneath the vehicle and nearly gave my hirer a heart attack. Out crawled this very bemused looking man in his late teen or early twenties.

"You've got to feel sorry for him. He's only young and it's just a shame they are prepared to do things that are so dangerous."

The man has been handed to the Home Office immigration enforcement team and taken to Dover Immigration Removal Centre.

Ms Tyrer added: "I just want as many people to know as possible so people are aware.

"It is really scary. Someone is going to fall off the bottom of one of these vehicles and cause a pile up."

Mayor of Calais threatens to block port over immigrants