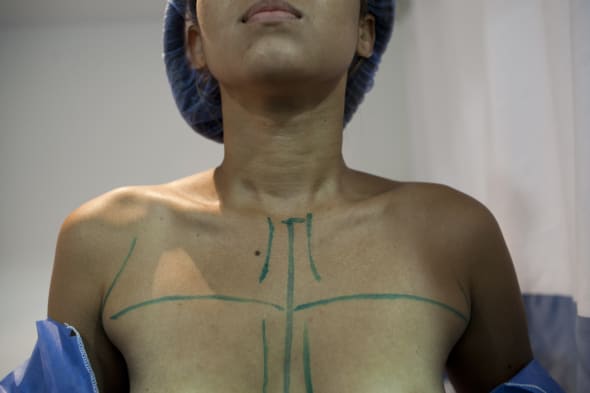 The economic crisis in Venezuela has had a bizarre side-effect: there's a chronic shortage of good quality breast implants. The country is the unofficial capital of the boob job, and there are reports that women are becoming desperate and accepting black market implants.

CBS News reported that Venezuela is culturally very focused on body image. What might be considered as vanity in other countries is thought of as good personal presentation. As a result it has one of the highest plastic surgery rates in the world.

The breast implant is the key form of plastic surgery in the country. It has become increasingly common for teenagers to get them as a reward for graduating from high school. The International Society of Aesthetic Plastic Surgery says there were 85,000 implants in the country last year alone.

Widespread shortages
The shortage has come about because of a historic focus on keeping prices low; falling domestic production; and draconian controls on currency - which mean companies and individuals are only allowed to spend a minuscule sum on goods and materials from overseas each year.

There have been reports of food shortages - with staples like rice and coffee disappearing from the shelves for months, and basics like milk, oil and flour becoming ever-harder to locate. There have also been shortages of toilet paper and even coffins.

There are those who argue that by comparison, the shortage of silicone implants is a desperately unimportant problem. However, in recent rallies against currency controls, in among the banners protesting about flour shortages, there were said to be some demanding more breast implants.

Health worries
And while it's easy to argue that this is a side issue that is only gaining attention because people like to talk about breasts, there is a deeper health concern. The shortage of implants has meant that surgeons are unable to purchase high quality implants from overseas, which means many are turning to lower quality imports from elsewhere, or the black market. The Daily Mail claimed that a local bartering website is packed with offers of black market implants of unknown origin.

The concern is that these cheaper implants could rupture, and given the high cost of having them removed, women may be stuck with a ruptured implant for months.

There have been no exhaustive studies into the medical risks this presents. However, there are anecdotal claims of joint pains, flu-like symptoms, memory loss, confusion, or a burning sensation. And the longer a ruptured implant stays in the body, the more risk there is of the silicone travelling around the body, and possibly causing damage elsewhere too.

So while protests about a breast implant shortage sound like they belong on a sketch show, the impact on women's health could be very serious indeed.