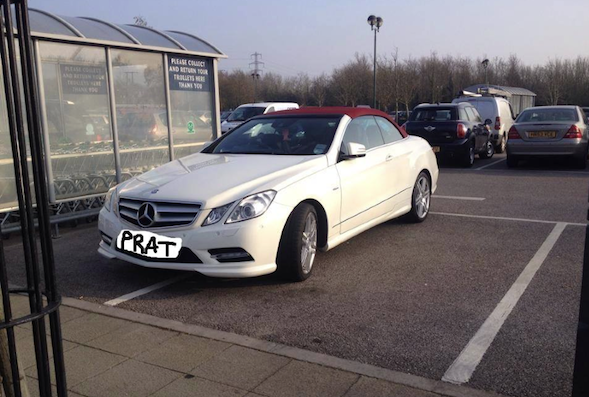 The summer holidays are officially over and parents across the country are now readjusting to mornings spent duelling over parking spaces on the school run.
Notorious for being a free-for-all, dropping children off at school by car can be a tense experience, as parents all vie for spaces as close to the gate as possible, which inevitably leads to some rather dreadful parking.

One group of parents at a school in Hampshire have got so fed up with drivers causing obstructions and potentially jeopardising the safety of children with their inconsiderate parking, that they've taken to social media to publicly shame those who park badly.

So, if you drop your children off at Horndean infant and junior school, be careful where you leave your car, as you may find yourself the latest object of ridicule on the group's Facebook page, 'People Who Park Like Prats'.

The group seems to have struck a chord with parents, having received over 300 likes and receiving images from users fed up with poor parking all around the local area. The school also supports the group, saying it sympathises with parents over the problem.

The News, Portsmouth, reports one of the mothers behind the group as saying: "I have three boys, we live a mile from the school and we walk. Quite a few of us do.

"The only time we'd drive is if it's raining. We all became fed up with the parking from parents who dumped their cars on yellow lines, junctions and the zig-zags."

However, while some are happy that something is being done to tackle the problem of poor parking, others are not quite so pleased.

"We take photos as discreetly as possible because people can be quite aggressive," she continued. "I have been involved in a couple of road-rage incidents.

"One woman yelled at me 'what are you looking at?' I told her she was parking illegally on the yellow zig-zags.

"She got in her car, followed us up the road, and did not see my son on his scooter when she swerved in to try to stop us walking away. She nearly ran my son over. People don't take to it kindly."

The zig-zag yellow lines outside the school have been repainted and the school is also looking into other ways of deterring poor parking in the area.

Check out the gallery below for some of the shocking examples of parking the group has made public.

Parents use social media to shame poor parkers
Up Next