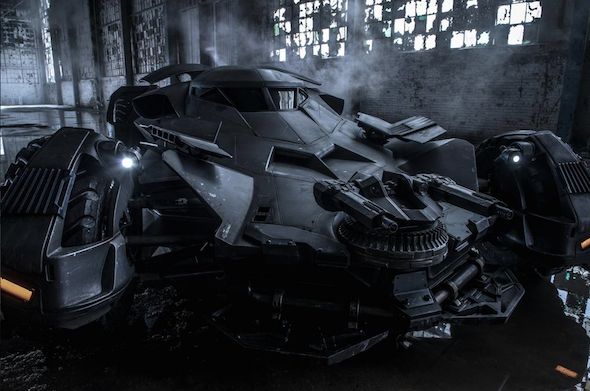 After previously tweeting teaser images of the forthcoming Batmobile, Hollywood director Zack Snyder has now revealed in full what the caped crusader's company car will look like.
Set to make an appearance in the upcoming Batman vs. Superman movie, the new car, pictured above, takes its military design inspiration from the 'Tumbler' Batmobile from Christopher Nolan's Dark Knight trilogy, though has a general shape more in keeping with the classic wheels of earlier films.

Certainly, Batman – who is set to be played by Ben Affleck - won't be lacking in firepower, as the new car wears its hardware with pride, with two socking great cannons sitting where a bonnet badge would normally live. Further details are yet to emerge, but expect plenty of surprises under that angular bodywork.

Batman vs. Superman: Dawn of Justice won't reach cinemas until March 2016. If you can't wait that long, click the video below to see further details of both the Batmobile, which have emerged from the film's set.