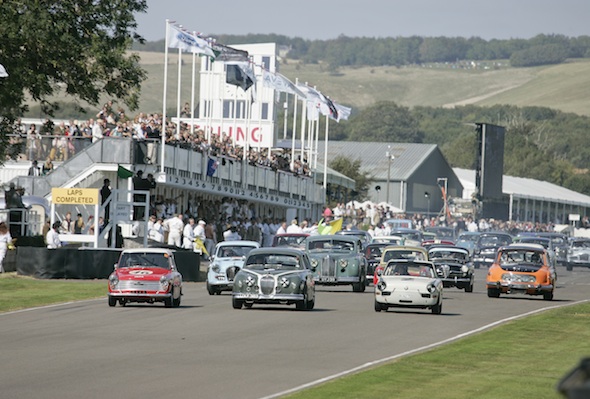 The 2014 Goodwood Revival is rapidly approaching, so we've rounded up some of the most appealing retro machines you can spot at this year's event, which takes place on September 12 to 14. The Revival event will see Goodwood transformed into a scene from the past with visitors encouraged to wear period dress to suit.
The Maranello Rosso collection of Abarths will be going up for sale on September 13 with 10 cars that have done service on the rack track and in hill-climb venues around the world going under the hammer. Models are expected to fetch up to £250,000.

The car with the highest estimate, is the distinctive wedge-shaped 1969 Abarth 2000 Sport Spider SE010 'Quattro Fari' prototype. Less than 50 of these streamlined machines are believed to have been built and consequently Bonhams, who will be managing the sale, expect this one to receive considerable attention.

Also making an appearance is the retro Speedback GT, a car with 60s styling, but thoroughly modern mechanicals. This unique, handcrafted creation will be on display for the duration of the event. "I am really looking forward to exhibiting Speedback at the Goodwood Revival," says company founder and CEO David Brown. "We enjoyed such a great reception back in June at the Festival of Speed, now we get a chance to dress up and really show the style and era that the car was designed to emulate."

Maserati, which celebrated its centenary this year, will be carrying on the festivities at Goodwood and celebrating the 60th anniversary of its legendary 250F Formula One racing car by releasing rare film footage of the car in action.

2014 Goodwood Revival gears up
Up Next


The luxury Italian brand will also be showcasing some of its rarest and most beautiful models at the festival, with a collection of racing cars recreating the 1954 pit lane in the 'Monza Paddock'. These beautiful machines will also compete against rivals from Ferrari, Aston Martin, Lotus, Lancia in the Richmond Trophy for 2.5-litre grand prix cars built from 1954 to 1960.

Touring cars are similarly well represented with eight British champions taking part in a Goodwood battle for 1950s production saloons. Brit Matt Neal who took BTCC crowns in 2005, 2006 and 2011 will be taking to the wheel of a 1959 Austin A35 – a far cry from the 21st century machines he won his titles with. Gordon Shedden who won the 2012 BTCC will also race an A35. Meanwhile, Jason Plato who currently holds the record for most BTCC race victories will partner with TV chef James Martin in a 1959 Ford Prefect 107E.

A trio of special parades will also be held to mark the 50th anniversary of Jackie Stewart's 'discovery' at the track. Stewart who had already been getting noticed in sports car racing, was spotted testing in early 1964 by Goodwood track manager Robin Mackay, who lay the foundations for the then 24-year-old to become a hugely successful racer. The very car that he drove during that test is one of the machines to make an appearance at the tribute, along with a number of the cars that he raced over the years.
Tags
Read Full Story Click here to comment