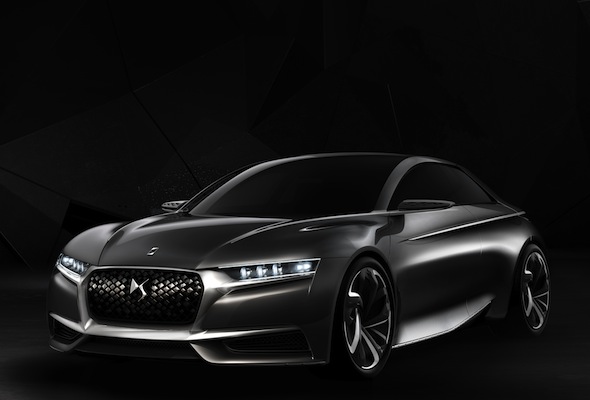 Citroen has previewed a brand new concept car that showcases the future styling direction of its upmarket DS sub-brand. Called the Citroen Divine DS, it will make its public debut at next month's Paris motor show.
The trio of models that currently make up the DS brand: the DS3 hatchback, the DS4 crossover and DS5 luxury people carrier, have proved popular with buyers, with their distinctive stylistic flourishes both inside and out. The French manufacturer is hoping to further seduce drivers away from their po-faced German cars with the Divine DS.

While the Divine DS is a hatchback, Citroen says that the car has solely been created to show off the general styling of future models, and does not represent a particular forthcoming car.

All of which is something of a shame, given just how striking it looks. The lack of rear window and the diamond pattern finish (created with a range of different paint textures) on the roof is typical of the eye-catching DS theme. The diamond pattern grille is chromed, too, to further grab the attention of passers-by.

In keeping with the DS range's 'posh option' theme, the Divine has been created in conjunction with Swarovski and Lesage, with crystals and upmarket embroidery lavishly used throughout the interior.

Further interior highlights include a dashboard and door panels that can be changed in as little in 15 minutes, should you get bored of the colour and ambience. We're not holding our breath for this feature to make it to any future customer models.

Under the bonnet, Citroen has fitted the 276bhp 1.6-litre turbocharged petrol engine from the hit Peugeot RCZ-R, which would mean the Divine DS could make a desirable alternative to the likes of the Volkswagen Golf GTI and Ford Focus ST.

The lack of Citroen badging on the car suggests the Citroen may be getting ready to launch DS as a brand in its own right, though this has yet to be confirmed.