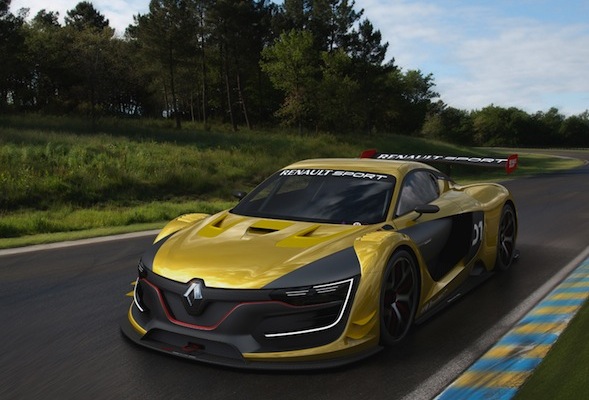 Renault has lifted the covers of its latest racing car, the R.S. 01, at the Moscow motor show.
Costing from £282,000 and aimed at privateer racing outfits, the new car will be eligible for competition in the one-make World Series by Renault championship from next year.

Full performance statistics have yet to be revealed, but the R.S. 01 uses the same twin-turbocharged 3.8-litre V6 engine as found in Nissan's flagship GT-R Coupe, with Renault claiming the vehicle is between a GT3 sports car and a DTM (German touring car) saloon racer in terms of performance.

The power has been scaled down somewhat for use in the racing car, though, with power dropping from 542bhp to 493bhp, and torque similarly reduced from 630Nm to 600Nm.

The engine has been significantly fettled to its new hard-working track role, including the fitment of a new dry oil sump to prevent engine oil starvation during hard cornering. The engine is now mated to a seven-speed sequential gearbox with paddle-shift control.

The car's striking design has taken more than a little inspiration from Renault's Dezir concept from 2010 – with its prominent logos, large grille and daytime running lights – though the brand itself says that much of the design is inspired by the Renault Etoile Filante, a record-braking land speed record car that reached 186mph on the Bonneville Salt Flats in 1956.

Four-time F1 world champion Alain Prost was on hand at the R.S. 01's unveiling, and commented: "Renaultsport R.S. 01 is a spectacular racing car, in the purest tradition of GT. With its high-level sporting capacities, Renaultsport R.S. 01 illustrates the rich expertise of Renaultsport, and its ability to develop the racing cars that will reveal future GT or endurance champions."