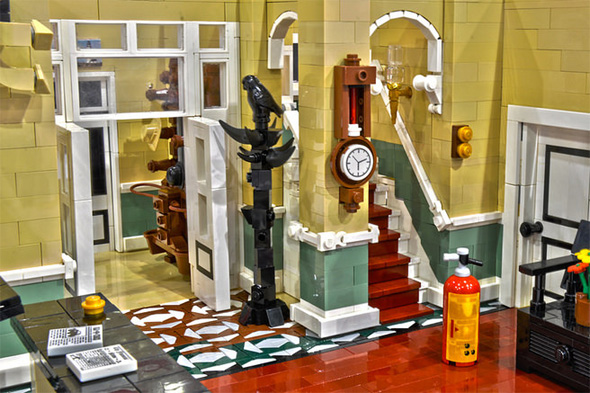 The iconic Fawlty Towers hotel lobby has been recreated out of LEGO.

Skilled LEGO builder Nathan Feist, 21, made the model for the annual BrickFair LEGO convention in Virginia, complete with the staircase, lobby and reception desk from the classic BBC comedy, Dangerous Minds reports.

His model even features the fire alarm, extinguisher and moose head with broken antler, which refer to 'The Germans' episode.

Feist posted photos of his model on a Eurobricks.com forum and wrote: "Here are some photos of my newest model I displayed at BrickFair VA this past weekend, a diorama depicting the set of the classic BBC Two sitcom Fawlty Towers." 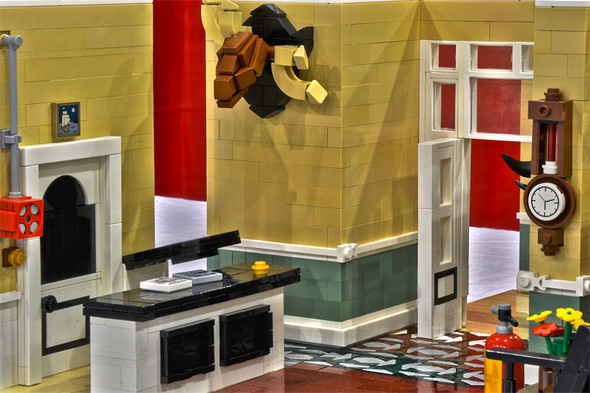 He added that he plans to "modify this and post another set of photos once I get some parts I don't yet own and will maybe even build the upstairs or exterior."

According to Metro, Feist said: "I considered Number Six's house from The Prisoner which I eliminated early on as I had seen a good LEGO model of its exterior and other Village buildings made by someone else not long before.

"I had already seen a Counter Strike map that recreated the Fawlty Towers hotel but I couldn't find any LEGO models of the hotel posted online.

"So I figured that if someone had only made a good virtual model of it, I should make an accurate physical model."

Sitting on the cliff path with lovely walks to both Ventnor and Sandown, the Hambldeon represents great value for money and tasty food, say reviewers. "Didn't want to leave - we'll definitely be back" says one. The hotel offers special walking breaks, escorted or unescorted. Visit hambledon-hotel.com.

With most of the bedrooms boasting beautiful sea views, La Haule "exceeds all expectations," says one reviewer. Highlightsinclude a beautiful sunken garden and an outdoor heated pool overlooking the St Aubin's Bay. "Classy, stylish, friendly, down to earth and awesome"  says one reviewer. Visit lahaulemanor.com.

The Cherwood  Hotel, just off the Esplanade, won both a Tripadvisor Certificate of Excellence and a Travellers Choice award last year. "We were made very welcome and can highly recommend." Visit cherwood-hotel.co.uk.

A small boutique hotel is a fully refurbished Victorian home with just three suites and five bedrooms. Ascot House is praised for "moving into the 21st century... unlike a lot of hotels in Torquay." Visit ascothousetorquay.co.uk

This hotel was a Tripadvisor Travellers Choice Winner for 2013, and is singled out for its service. "We loved it so much that we booked again for the next two years as it is a very popular hotel. You only have to stay here to see why," says one reviewer. Visit lauristoncourt.com.

This stylish boutique country house, nestled on the "idyllic" Exmoor coast, features ten cosy rooms, each with its own style and decor, offering an eclectic mix of contemporary and antique. The owners, Sam and Huw, "make hotel guests feel like old friends" say reviewers. Visit  oldrectoryhotel.co.uk.

Meander up a cobbled lane from the beach to find this lovingly restored "island gem": think rustic simplicity, charm and friendly service. "The accommodation could only be described as superb," says one reviewer. Another described it as "An amazing hotel on an amazing island."

Visit Britain recently awarded the Elmdene five stars – and it also received an award for excellent breakfasts. It's 300m from the beach and boasts a lawned garden. With just six rooms, you'll need to book in advance. "Everything was great, the room the food and the service was possibly the best I have experienced from any hotel." Visit elmdenehotel.co.uk.

This seafront hotel has recently been refurbished, with highlights including a friendly bar and a sun lounge with sea views. It's described as "top class" and "immaculate" by Tripadvisor reviewers.

A small hotel with a huge reputation, this Victorian seaside home which overlooks Llandudno's seaside promenade gets rave reviews all round. Sea view rooms are particularly recommended. Visit can-y-bae.com.

British hotels offer the worst service in the world

Fawlty Towers hotel immortalised in LEGO
The 5 star Egerton House is a boutique hotel conveniently located in London's fashionable Knightsbridge. The hotel has been meticulously refurbished with style and flair and offers luxury accommodation. Guests will find themselves just a short walk from Harrods and some of London's best known museums.
Lauriston Court is, not only, one of the best hotels in the country for customer service but it has also been voted one of the best in the world. The hotel is ideally located opposite the pier on Llandudno promenade making it one of the best positioned hotels in Llandudno North Wales. The family run hotel prides itself on cleanliness and good service.

This five star coastal hotel is situated in beautifully landscaped gardens and commands magnificent views over St. Aubins Bay, Jersey, just a few minutes walk from the delightful yachting harbour and village of St. Aubin, where you can enjoy a wide range of cuisine.

The Atholl Villa Guest House is a 3 star GOLD B&B situated in the heart of Pitlochry and offers 10 en-suite bedrooms, designed with comfort in mind. The 150-year-old house offers character and original features.
Grasmere Hotel is a small Victorian Country House Hotel and Restaurant set in the heart of the English Lake District and on the edge of Grasmere Village. Breakfast and dinner are served in the conservatory restaurant overlooking the secluded garden and the river Rothay.
Castlecroft bed & breakfast is situated right below Stirling Castle with stunning views over the Carse of Stirling and the mountains. The B&B is conveniently located on the Lower Back Walk which is a public footpath right from Castlecroft into Stirling Town Centre (about 8 to 10 minute walk) with the castle woods on one side and the King's Knot on the other.

The Clarence Hotel is Portsmouth and Southsea's newest and most exciting luxury boutique hotel. The Edwardian residence has been stylishly converted to create eight individually and professionally designed bedrooms and bathrooms with the emphasis on quality and luxury. The award winning hotel is situated only a few hundred yards from the seafront.

The Elmdene Bed and Breakfast offers 5 star guest accommodation in Torquay. The family run hotel takes pride in offering all of its guests high standards of service and attention.
Up Next