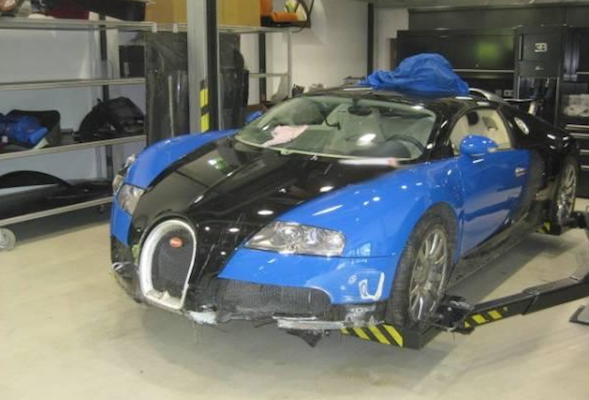 If you've been driving for any length of time, chances are you've had a small prang, whether it was kerbing a wheel, bumping into another car when parking or a something a little more serious. It's unlikely that you've ever wiped off around £500,000 from the value of your car though.
However, that's exactly what's happened to one Bugatti Veyron owner. Somehow the driver managed to run out of talent on the Austrian autobahn back in April and destroyed the right hand side of the car, peeling back the expensive bodywork, scraping the car's flanks and ripping off the right rear tyre.

Auto evolution reports that the undercarriage of the car is full of plants and dirt, suggesting an off-tarmac foray, while the suspension has been similarly pummeled. Despite all this, one unidentified buyer has just paid the princely sum of 254,000 Swiss Francs for this 2008 car (£167,243), which has covered 19,836 miles on (and presumably off) the road.

Sold by insurance firm Axa, this car may have set back the buyer around £500,000 less than similar uncrashed versions, though they'll need well into six figures to return the car to its former glory. Estimates suggest that the new owner won't see much change from $800,000 (£482,712) for repairs, taking the total cost up to around £650,000 – not far off the price of a pristine 2007 model. We know where our money would go...

Hopefully the next owner will pay a little more respect to the Veyron's whopping 987 horsepower count and take it easier on the autobahn. Take a look at the damage below: