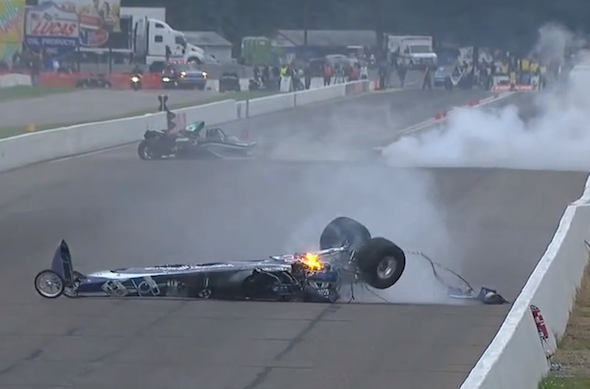 Motorsport – as the signs that line nearly every racetrack will tell you – is dangerous. No matter what your chosen discipline, powerful vehicles being driven at the limit by drivers focused solely on winning, will inevitably result in the occasional smash.
However, that danger factor is ramped up significantly in the world of Top Fuel drag racing. Swapping conventional fuel for highly explosive methanol-based concoctions, these lengthy racers are built for one thing only: blistering acceleration in a straight line.

Their unusual shape certainly helps in that regard, but should a drag racer wobble from its intended line, they are notoriously difficult to recover, as the two racers in the video below would testify.

Filmed at a drag strip in Brainerd, Minnesota, the footage captures the moment both drivers lose control of their vehicles within seconds of each other, resulting in simultaneous barrel rolls, with one car bursting into flame as its fuel lines are ruptured.

Both drivers were pulled out of their cars. One received medical attention at the scene, while the other was airlifted to hospital. Currently there is no word on his condition.