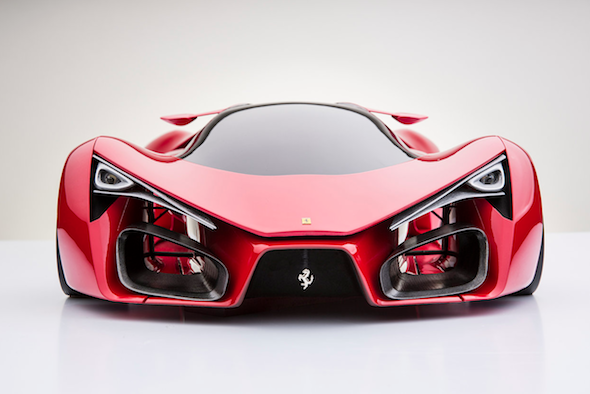 Speed is very much top of the agenda with the latest breed of super-hyper-megacars, which are steadily inching their way towards the 300mph mark. And the latest – albeit hypothetical – model to stick its finger in the air with a target top speed, is the Ferrari F80 concept.
Where Bugatti and Hennessey have made meagre top speed claims for their forthcoming models, of just 286mph and 290mph respectively, the latest challenger to the speed throne is gunning for a VMax of 310mph – twice the speed that German car companies limit their fastest cars to.

This Ferrari F80 Raeli concept has been created by Italian designer Adriano Raeli and makes the none-too-shabby Ferrari LaFerrari look tame with its voluptuous curves and sharp edges.

The proposed plan for this machine could see an extra dose of steroids under the bonnet too. Gone is the V12 motor found in the LaFerrari and in its place is a twin-turbo V8 with a hybrid power hike, thanks to Ferrari's KERS kit, reports Bold Ride.

With 1,200 rampaging ponies power this Ferrari could pounce to 62mph in just 2.2 seconds and slice its way through the air to a top speed of 310mph.

Yes, this machine may be just a concept at this stage, but if and when Ferrari get around to replacing the LaFerrari, we can think of no better starting point than this F80.

Whatever happens, competition for the speed crown will be fierce with the Hennessey Venom F5 in the American corner, the Bugatti Veyron successor hailing standing tall for Germany and this latest potential competitor waving the flag for Italy. Place your bets now...