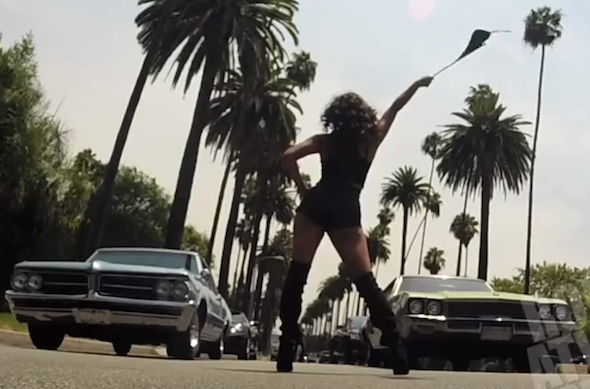 Driving a supercar isn't always the exhilarating, white-knuckle experience that it should be. Contending with the boring reality of traffic and the morning commute, life in a high-performance sports machine can be frustrating, as the car strains against the leash, desperate to be out on the open road.
Thankfully there is more than one way to entertain yourself in a fast car, as US prankster Roman Atwood has been ably demonstrating. Assembling a gaggle of exotic machinery, one scantily-clad girl with a flag and a CD of engine noises, he sets about annoying police in Los Angeles by 'drag racing'.

However, rather than actually toasting other traffic in his convertible Ferrari, the inventive joker instead drives off at walking pace, leaving the engine noises blaring out the stereo to goad the cops into giving chase. Once pulled over, the somewhat over-zealous officers are more than a little red faced at being had.

We can't imagine police in the UK having quite so much patience with this sort of jape, so try it at your own peril. Click play to watch below.