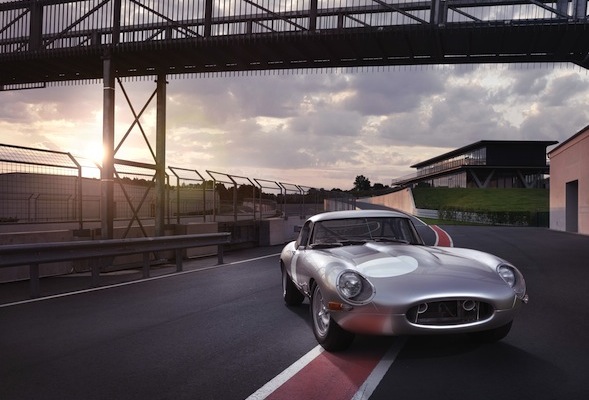 Jaguar has lifted the covers of its new Lightweight E-Type, at the Pebble Beach Concours d'Elegance event in California.
Marking the first time a newly constructed E-Type has left the Jaguar factory gates in nearly 40 years, the lightweight model is a completion of a model run of 18 'Special GT E-Type' cars that were created solely for competition use.

For reasons unknown, only 12 of the original cars ever left the company's Browns Lane factory in Coventry. Now, though, Jaguar has committed to finishing the manufacturing run that began in 1963, with the six new cars being made to the exact specification as their estranged siblings.

As such, each car will feature a 3.8-litre, six-cylinder motor developing 335bhp and 379Nm, which is sent to the rear wheels through a four-speed manual gearbox.

The Lightweight nomenclature derives from the all-aluminium bodyshell, which weighs a considerable 114kg less than the body of the standard E-Type. Each model will be constructed using period manufacturing methods, by senior Jaguar craftsmen at a new facility at Browns Lane.

The period construction means the new Lightweight cars are eligible for entry into FIA historic motorsport events. In part, the cars are designed to showcase the skills of Jaguar's new Special Operations division, which handles bespoke requests from well-heeled customers looking to individualise or restore their cars.

Jaguar Lightweight E-Type revealed in full
Up Next


Jaguar's Director of Design, Ian Callum, said: "With the Lightweight E-Type, our focus as a design team has been to ensure justice was done to the original work of Sir William Lyons and Malcolm Sayer.

"Meticulous attention to detail has been everything to us in re-creating this car, just as it is in our contemporary Jaguars. I believe the result is a new Lightweight E-Type that is as stunning now as the originals would have been when they were new."

If, like us, you're a big fan of the original E-Type, the news is likely to be rather exciting. You're going to need to be in Jaguar's good books though, as established collectors of the marque are to be offered first refusal before the invitation to buy is extended to a wider market.

Either way, any potential buyer is going to need deep pockets, with each of the six lightweights estimated to cost around £1million.

Click play below to see this stunning new classic in action.