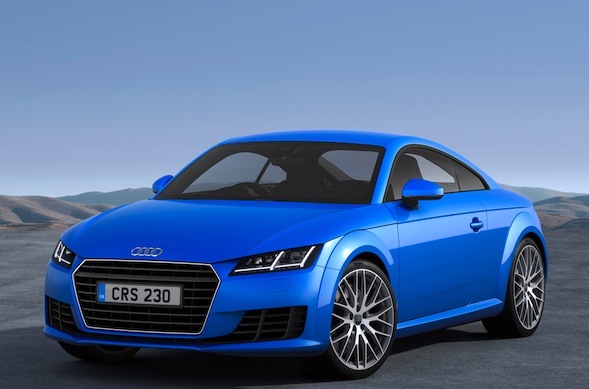 The all-new Audi TT has gone on sale today priced from £29,770, with the first customer cars expected to arrive in December.
The new model is the third iteration of the iconic sports coupe and features styling that is more an evolution of older models than a wholesale restyling. As such it carries over the smooth, pebble-like shape of its forbears, but introduces more angular design touches, particularly around the front lights and grille, which form part of the brand's current design theme.

Initially, the TT will be offered with a choice of two engines: a 2.0-litre TFSI turbocharged petrol developing 227bhp and a 2.0-litre diesel with 181bhp.

The petrol model is available with both front- and four-wheel-drive and buyers will have the option of the standard six-speed manual gearbox or a six-speed twin-clutch automatic unit. It is capable of covering the 0-62mph sprint in 6.0 seconds before topping out at 155mph and will return 47.9mpg and emit CO2 at a rate of 137g/km.

The diesel, meanwhile, is available with front-wheel-drive only, though is likely to be the engine of choice for those more concerned with running costs than performance, with impressively low CO2 emissions of 110g/km and a combined fuel economy figure of 67.3mpg. That said, it will still get from 0-62mph in 7.1 seconds, and will accelerate all the way up to 150mph.

Audi confirms TT price and specs
Up Next

Both models are fitted with Audi's new 12.3-inch TFT digital dashboard, which takes the place of a separate screen, being able to display audio, climate and sat nav displays.

Being an Audi, the TT is available with a wealth of optional extras, highlights of which include full internet connectivity, with social media and Google street view integration, and a high-spec Bang & Olufsen stereo.

The TT range will grow to include more engine options after launch. Already confirmed is the performance oriented TTS with 306bhp, order books for which are due to open in October.
Tags
Read Full Story