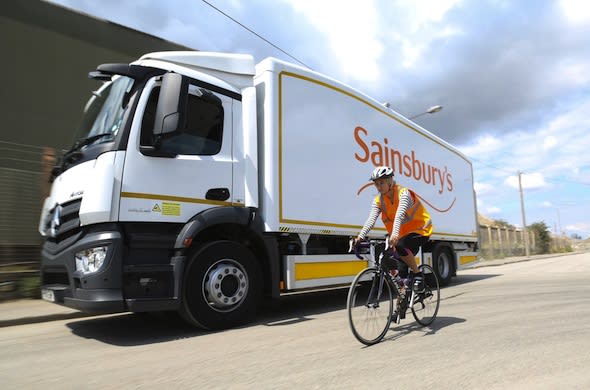 Supermarket Sainsbury's has launched a new lorry which is designed specifically to protect cyclists and pedestrians better. Following a number of fatal collisions between lorries and cyclists in recent months, The company has developed a truck which should give bikers and those on foot better protection than current models.
The new Mercedes-Benz Antos 1824L, which was unveiled by Mayor of London Boris Johnson today, features 360 degree monitors to give drivers a much better view of cyclists and pedestrians around them. Other features include extra side lighting to give the driver better visibility at night and low side guides to prevent cyclists from ending up underneath the vehicle, in the event of a collision.

Retail and operations director Roger Burnley said: "This is an important step in our work to make London's roads safer. We've put an enormous amount of thought and research into creating a truck that we hope will be the safest on the road – for all road users."

Cameras around the lorry help shrink blind spots for the driver and new proximity sensors along the side of the lorry beep to alert the driver to other road users. A warning sticker other alerts cyclists and drivers that they are in the driver's blind spot.

A tail lift warning beeps to warn those behind the lorry when the tail is being lowered. Drivers will also be given further driving training to ensure they know how to make the most of the vehicle's safety features.

James Colbourne, Head of Strategic Accounts - Trucks, for Mercedes-Benz said: "In building these vehicles Sainsbury's have invested heavily in the safety of both cyclists and pedestrians and have built what can only be described as a fleet of some of the safest vehicles on the road."
Tags
Read Full Story