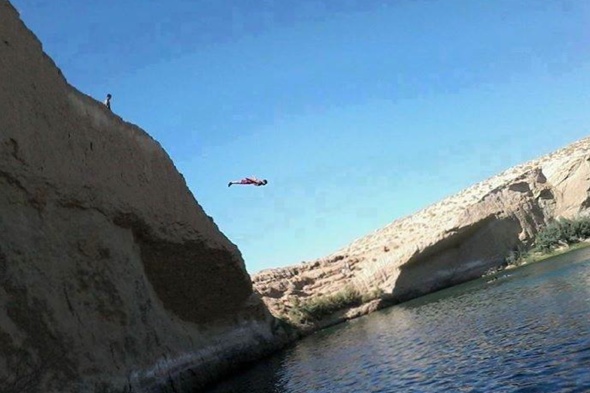 A lake that has mysteriously appeared suddenly in the Gafsa region of the Tunisiandesert has become an instant tourist attraction.

The lake, which has been dubbed Gafsa Beach and has its own Facebook page, was discovered by shepherds three weeks ago.

It is estimated to stretch over a hectare, and be 10 to 18 metres deep.

More than 600 people have flocked to the lake to cool off in the 40C heat. People have brought along surfboards and scuba diving gear, and have been spotted jumping off the rocks into the water. However, authorities are warning that the water could be carcinogenic.

Gafsa's Office of Public Safety could even be radioactive.

According to the Independent, journalist Lakhdar Souid said: "This lake is located in an area rich in phosphate deposits, which leave residue that is sometimes strongly radioactive.

"So there is a real risk the water is contaminated and carcinogenic.

"In the first few days, the water was a crystal clear, turquoise blue. Now it is green and full of algae.

"This means it is not being replenished and is conducive to disease."

Tunisia is the fifth largest exporter of the chemical phosphate in the world, and Gafsa is home to one of the largest phosphate mines.

News.com.au reports Mr Souid continued: "News of the lake's appearance has spread like wildfire and now hundreds of people, eager to escape a heatwave, go there to swim. While the origins of this lake remains a mystery, our biggest concern right now is the quality of the water.

"This region is overflowing with large deposits of phosphate, which can leave behind radioactive residue so there is a real risk that this water is contaminated and carcinogenic (but) there is no security of any kind."

According to IB Times, Mr Souid added: "Despite the warnings issued by the Office of Public Safety, hundreds of swimmers have visited the lake. The site is certainly stunning and there are many large rocks perfect for diving. So to truly dissuade people from coming, we'll need something more convincing than a little warning."

There is no official explanation for the lake's origins, but local geologists have suggested a seismic activity may have disrupted the water table and caused groundwater to rise to the surface.

Giant hole in desert has been on fire for 40 years