​Killer driver using two phones while at the wheel 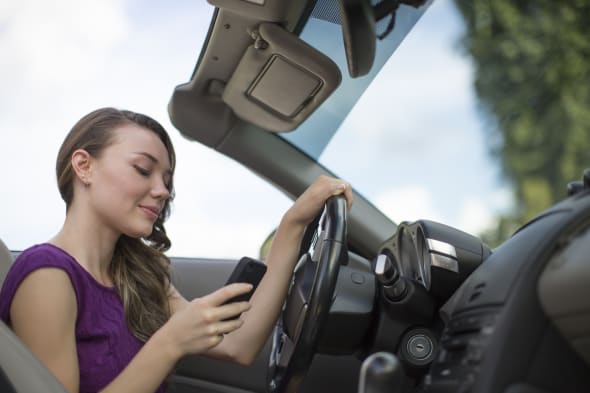 A motorist who smashed into another car, killing the driver, was using two phones shortly before the collision. Marina Usaceva was jailed for six years yesterday, after Peterborough Crown Court heard that she had received calls and had been texting in the minutes preceding the collision.
Usaceva had been driving at 70mph in a 60mph zone, claimed Georgina Gibbs prosecuting, reports the Express. Witnesses say that Usaceva's Jaguar X Type braked hard for a speed camera shortly before crashing into the back of a Peugeot 206, fatally injuring the driver, Sukhdeep Singh Johal. Mr Johal, 27, a recent biomedical science graduate, died at the scene.

Judge Sean Enright told a weeping Usaceva: "If you were not sending texts at the time, then you were fiddling with your phone and that is what caused this collision. In my opinion there is not a scrap of remorse." Judge Enright added: "Mobile phone use while driving is a plague on society", jailing her for six years and banning her from driving for eight years.

Latvian-born Usaceva from Peterborough had previously received points on her licence for using a mobile phone while driving in 2009 and 2012 and admitted causing death by dangerous driving, writes the Daily Mail. The 31-year-old had been using Sony and Samsung phones in her car while driving in Wisbech, Cambridgeshire, in March last year.

She had texted on the Sony 15 minutes before the crash and received text messages a few minutes later, the court heard. A call was made from the Samsung and a further three more received in the 20 minutes preceding the crash. Inspector Bob Turner, who was involved with the police investigation, said after the case: "I have never seen anything like it before – it was crass stupidity."

Following a number of deaths caused by drivers using mobile phones, government ministers have introduced plans to issue six penalty points to drivers caught using a phone while behind the wheel. Other plans mooted include checking the mobile phones of all drivers involved in all crashes, in an attempt to limit the amount of deaths caused by drivers using their phones.
Tags
Read Full Story