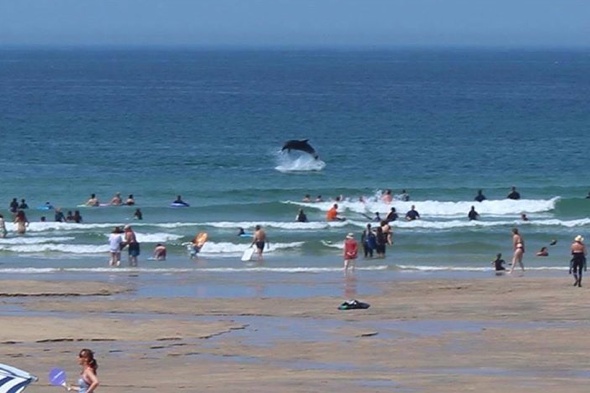 Three dolphins put on an amazing display for surprised holidaymakers at a beach in Cornwall.

The playful dolphins were seen jumping out of the water just metres from tourists at a beach in Gwithian, Cornwall.

They jumped and dived right near the shoreline and one lucky visitor managed to take a picture, which was uploaded on the Cornwall Holiday Guide Facebook page.

Mary-Anne Drabble, who managed to capture the moment on camera on 25 July, described it as an "amazing" experience.

According to the Daily Telegraph, she said: "There were three of them and they were jumping out and showing off. It was just amazing to see. Everybody was cheering."

Some sceptics, however, commented beneath the picture that they thought it might be a fake.

One user wrote: "Fake look at the people on the beach they are not even looking, Dolphin is about 20 foot in shallow water ....any back up."

Another, Kayleigh Copley, replied: "U people are chuffing crazy I can see everyone looking the tides are very different to the likes of Skegness lol the depth can drop at any time plus I was there."

And Sophy Newton wrote: "THIS IS NOT A FAKE. I was there and so was my husband, sister and kids. We all saw it with our own eyes It was amazing. Don't be so quick to disbelieve!"

Dolphins in Cornwall delight tourists on beach
Up Next

Dolphins in Cornwall delight tourists on beach
This small hamlet has a number of surprising joys, including the Beach Restaurant, where al fresco dining is a joy, a number of art galleries, and a Blue Flag beach. It's good for year-round surfing and wonderful cliff walks: you can walk round to Land's End from here and enjoy the spectacular views.
Set in the middle of a huge sweeping bay, the working fishing village of Porthleven is a wonderful place to while away the time. Its impressive harbour was constructed during Napoleonic times, and many of the historic buildings around the harbour are around 200 years old. Why we love it: The strict conservation  rules means Porthleven remains an unspoilt, working harbour - increasingly rare in the UK these days..
This beach on the North Cornish coast is one of the world's most renowned surfing destinations.  Did you know? Polzeath is a Marine Conservation  Area: look out for puffins, dolphins and rare sea birds.
This iconic rocky island, crowned by a medieval church and castle, dates back as far as the 12th century. New for 2013: Don't miss the Island Life talks being held around the village and harbourside on Tuesdays and Fridays.
The most westerly estuary in the country, the Hayle Estauary is a twitcher's paradise. Owned by the RSPB, this is a Site of Special Scientific Interest, largely because of its wintering wildfile and waders. Don't miss: the views from the Eric Grace Memorial hide.
This wide arc or golden sand is only 10 minutes walk from Falmouth town centre.
Up Next

Video: Baby dolphin's 'thank you' dance after being freed from plastic bag