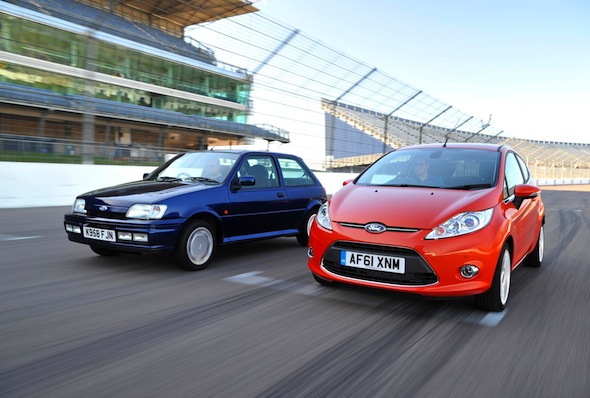 The Ford Fiesta has become the best-selling car of all time in the UK, after total sales topped 4,115,000 units this month.
The iconic hatchback takes the crown from the Ford Escort, of which 4,105,961 were bought in the 32 years it was on sale, before being discontinued in 2000.

The Ford Fiesta has proved consistently popular with buyers since the first model's introduction in 1976, and has topped the annual sales charts for the last four years running after it overtook its bigger brother, the Ford Focus.

The Fiesta nameplate has been synonymous with British motoring throughout its history, with its compact shape and easy-to-drive demeanour proving popular with everyone from learner drivers to OAPs.

A number of sporting iterations, from the XR2i and RS Turbo of the 1980s to the modern Fiesta ST, has ensured the Fiesta also had a broader appeal amongst keen drivers, too.

Mark Ovenden, Ford Britain chairman and managing director, said: "The Ford Fiesta has gone from strength to strength and today's car combines style, value, driving dynamics and remarkable technologies such as the multi-award-winning 1.0-litre EcoBoost engine. It continues to outsell its nearest retail competitor by more than two to one – and that really tells the story of this extraordinary car."

Currently, around 40 per cent of new Fiestas are sold with Ford's remarkable new 1.0-litre EcoBoost engine, which provides the power of an older 1.6-litre motor, but with CO2 emissions from as low as 99g/km.

10 PHOTOS
The Ford Fiesta: Then and now
See Gallery