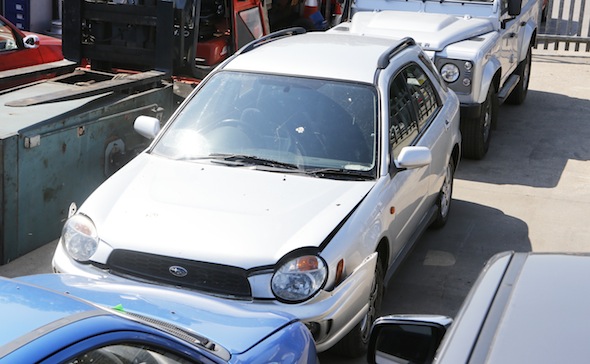 Parents with teenage children will be the first to tell you that kids are often desperately impatient to get behind the wheel and onto the open road. For one family however, the driving bug clearly hit a little early when their three-year-old drove away in the family estate car.
The unnamed child managed to unlock and start the engine of his parents' Subaru Impreza. As it was fitted with an automatic gearbox, the young joyrider was then able to edge it out of the driveway of his home in Midhurst, West Sussex, and out onto the road.

He then drove down two separate 30ft embankments before coming to a stop after a minor collision in the garden of the nearby Duke of Cumberland Arms pub.

The incident, which occurred at around 8am Wednesday, saw police and paramedics called to the pub, after the boy suffered a small head injury.

Luckily, the young tear-away managed to avoid hitting any pedestrians and had not come close to joining a main road. The pub's owners were believed to have been away at the time.

A Sussex police spokesman said: "The boy unlocked the Subaru Impreza vehicle, which is an automatic, started it and drove it down the driveway, down two embankments and ended up in the garden of the Duke of Cumberland Arms pub," The Guardian reports.

"He suffered a slight bump to the head after hitting it on the steering wheel. An ambulance was called and he was taken to hospital to be checked out.

"No one else was hurt, although the car was damaged."
Tags
Read Full Story Click here to comment