This Bugatti replica is not fooling anyone 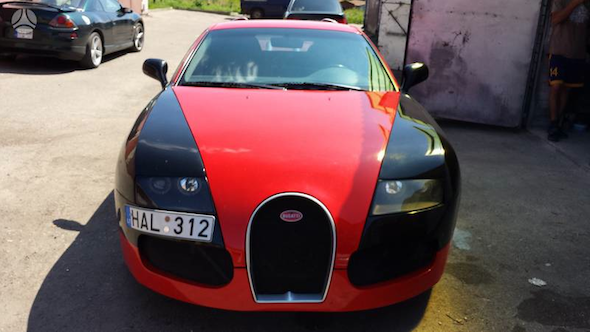 The Bugatti Veyron is one of the fastest machines money can buy with a 987bhp powerhouse crammed under the bonnet. And with list prices for the "standard" car standing at not far short of £1m, it's also one of the most expensive.
If you can't quite stretch to the £999,999 needed for a 2014 model with just 300 miles on the clock, or even a mere £675,000 for a well-used 2007 model, fear not, as Lithuania may have the answer.

For just £23,743 you could buy this eastern European Veyron-alike, based on a not-so-exciting 1997 Audi A6 2.8 Quattro. With 790bhp and four turbochargers missing from the engine compartment, you can rely on this car not to accelerate anywhere near as fast as its Bugatti wannabe styling may suggest; not that the distorted design is really going to fool anyone with a modicum of eyesight.

Judging by the advert, the owner however, may be overdue a trip to the opticians. Roughly translated the ad states that this machine "is a unique car which will look like two million worth of supercar". Which currency they are referring to remains to be seen...At least the car has four-wheel drive to get itself out of the social hole potential owners will be digging themselves into.

Bedecked in a suitably unsubtle red and black finish with black wheels, this replica costs around 15 times more than unmodified 1997 Audi A6s. Want it? Better get your flights booked to Lithuania...

This Bugatti replica is not fooling anyone
Up Next