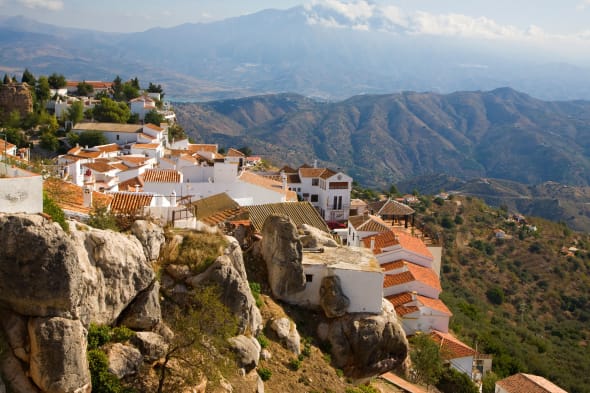 A holiday in Spain isn't all just beaches and sea. Explore beyond the well-trodden sands of the Costa del Sol and you'll find the country has some wonderful hidden gems, including unspoilt whitewashed mountaintop villages and pretty towns with incredible view. And the best news is that many of which can easily be reached in a day trip from the popular coastal resorts. There's a real joy to going off the beaten track here: all you need is a set of wheels.

Head to Andalucia, for example, and you're spoilt for choice. A visit to the tiny town of Comares, an impossibly white picturesque town perched atop a 700ft cliff and just a stone's throw away from Malaga, is a must. Alternatively, spend some time discovering the fascinating historical town of Gaucin, best known for its spectacular views over Gibraltar and north Africa: well worth a trip and just half an hour from the coast.

So next time you visit Spain (still the most visited destination by UK travellers), take some time to explore its secrets by checking out some of our suggestions below, as recommended by TripAdvisor reviewers.

Do you have a favourite Spanish town or village? Tell us in the comments below!

It may only be half an hour's drive from the Costa del Sol, but  Gaucín provides a completely different world. This little gem is known for its spectacular views of Gibraltar and North Africa as well the surrounding mountain scenery and is not to be missed.

Beautiful Archidona, just 50 kilometres from Málaga City, sits at the very centre of Andalucia, 660 metres above sea level. Picturesque and tranquil, the highlight is the Plaza Ochavada, a beautiful Baroque square at the heart of the town.

A mere 14km from the Costa del Sol, this village has miraculously escaped the modern rebuilding that has blighted much of the Spanish landscape. Outstanding sights abound, including the Arab Fortress, the Fountain of Carlos III and the Baths of La Hedionda.

The small traditional village of Bunyola sits on the southern slopes of the Sierra de Tramuntana Mountain range, just nine miles from the city of Palma. Bunyola has, for the most part, ignored the tourist developments that have taken place throughout the rest of the island, and is one of the few untouched Mallorcan villages that still exist.

This charming whitewashed village is nestled between three rocky spurs, topped by the ruins of the castle, which was first built by the Phoenicians and subsequently expanded under Roman rule. This  is one of its main tourist attractions, but the atmosphere of the town is friendly and laid-back: many visitors like to stay and sample the local food in one of the town's many decent restaurants.

Beautiful Iznajar sits on a hill above a spectacular reservoir, the Embalse de Iznajar. The village serves as a natural entrance to the Sierra Subeticas Natural Park, which is worth a day exploring in its own right. Points of interest: The 7th century church, built by the Moors, and the Church of Santiago Apostol, whose spires dominate the town's skyline.

Set within the Sierra del Grazalema Natural Park, life in his little off-the-beaten-track town goes on at a very different pace. The area is popular for rural tourism, and offers excellent walks, mountain views and potholing. Don't miss: A trip to the Pileta Caves, where you can see etchings from more than 25,000 years ago.
Picuresque Cala San Vincente, on the isolated north eastern tip of the island, sits on steep cliffs on a quiet bay with a wide sandy beach. This is the perfect escape from the busy town of Ibiza which is less than 20 miles away.
This tiny white wonderfully picturesque town, which sits atop a cliff more than 700 metres above sea level, is known as the 'Balcony of the Axarquia' because of its incredible views across the mountain range. It's less than 40km from Malaga and boasts lots of fascinating historical points of interest. Highlights include the ruins of a Moorish fortress and the Church of the Incarnation, which dates back to the 16th century.
Less than 30km from Benidorm, Guadalest is worth the twisting mountain drive for its views alone. This medieval town has been voted one of Spain's top tourist attractions, and is best known for its castle, which literally hangs off the cliff face.
Up Next

Why Majorca is perfect for a short break

Ten of the best beaches in Spain

Have you ever been to the town that lives under a rock?

Endless sea, fine sand, spectacular views and Ibiza on the horizon. No wonder this beach takes pride of place in Tripadvisor's best beaches in Spain. What visitors say: “You have the sea on both sides, which makes it unique. The views are amazing. The water is crystal clear.”

This beach in Galicia, on the Cantabric coast has been declared a national monument. With its sea caves and natural arches, it's wonderful for exploring at low tide. What visitors say: “The beach itself is gorgeous, but just the view of the sea from the top of the rocks makes one dizzy.”

La Concha, which  means 'shell' in Spanish - this beach is shell-shaped - is one of the most famous urban beaches in Europe and one of the loveliest in the Basque Country. What visitors say: "Beautiful scenery and very clean beach. Well worth a visit. If you want a place to recharge your batteries this is it."

This beautiful sandy bay near Cadiz is singled out for its unspoilt beauty. Sun worshippers in this area usually head for the joys of Tarifa, so the beach here remains largely unspoilt (although it's a favourite with Spanish families.) What visitors say: “This is a fantastic empty beach, at least in May.”

The sandy windswept beach on the Peninsula de Jandia is spectacular and gloriously empty even in peak season. The relentless surf pounds the beach all day so it's not for swimmers - but its beauty is undeniable. What reviewers say: "Amazing... I will never forget it." "It's like being in another world."

Being so close to the Strait of Gibraltar, this is precious environment is ideal for bird watching during migration periods, as well as whale watching. "There is nothing bad about this place. Clean sea, excellent food and calm ambiance. Ideal for a romantic walk at dusk," says one reviewer.

With some of the cleanest, clearest water and the softest golden sand in Ibiza. Situated on the west coast of the island, this is also one of the most popular beaches in the area. What visitors say: “Lovely bay, busy though even in October.”

The "jewel in the crown" of Gran Canaria, Playa de las Canteras is a long strip of sand protected by a natural reef that stretches for miles along the bay. Locals say it's one of the Spain's best urban beaches: people flock to this fantastic beach because of its ideal conditions for eater sports, too (the waves at one end are perfect for surfing). Reviewers rave about its  cleanliness and "amazing atmosphere"."The best beach in the world," says one.
This beautiful wide, soft stretch on the Atlantic coast boasts miles of fine clean golden sand it's so huge that doesn't feel crowded, even in the height of summer. Plenty of bars and immaculate rest rooms are singled out here too. "This really is a terrific place to spend your day," says one reviewer.

The breathtakingly beautiful wild beaches on the north west coast of the island boast lovely little coves give a deserted feel that is perfect for anyone wishing to get away from it all. There are lots of secluded spots (and plenty of naturism) and plenty of amazing snorkelling in the lagoons. What the reviewers say: "Seemingly endless, beautiful beaches. A perfect mix of volcanic bizarre looking rocks and Sahara sand."