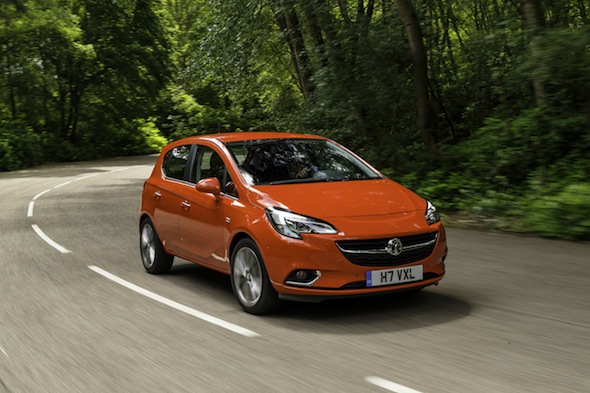 This is the all-new Vauxhall Corsa, the latest entrant into the hotly contested supermini market.
Going on sale in October with a projected price tag of under £10,000 in entry-level form, the Corsa is Vauxhall's latest salvo at the all-conquering Ford Fiesta, the car that the Luton brand hopes to overtake as Britain's best seller.

Full price and specification details are to be announced after the Corsa's public debut at October's Paris Motor Show, but what is known is that the new car will be offered in both three- and five-door guises and with a brand-new 1.0-litre turbocharged three-cylinder petrol motor.

That engine will be offered in 89bhp and 113bhp states of tune, and will be just one of a number to be offered from launch, including a heavily revised version of the current 1.3-litre diesel and a 1.4-litre turbocharged four-cylinder.

A hot VXR edition is also likely to follow at some point after launch, although that has yet to be officially confirmed.

The Corsa has proved to be a popular model throughout its history, particularly with younger and first-time drivers. However, it has never quite matched up to the dynamic prowess of the Fiesta, nor the quality or design flair exhibited by newer rivals, such as the VW Polo and Citroen DS3. Vauxhall is hoping the new model will change all that.

Vauxhall unveils all-new Corsa
Up Next


Tim Tozer, Vauxhall's Chairman and Managing Director, said: "New Corsa has its work cut out – both as a worthy replacement for the existing car later this year, and as a new challenger in a highly competitive class. We're confident that it will jump both hurdles with ease."

The brand is claiming the new car will offer a more involving driving experience of "class leading standards", thanks to a redesigned chassis, which it also claims has wrought benefits to refinement, economy and ride quality.

The styling, too, has been heavily changed, with none of the body panels carried over from the outgoing model. The front-end styling borrows heavily from the Adam city car, particularly in the headlamp and grille design. A new 'blade' surface treatment running along the side of the car helps to break up the visual bulk, especially on five-door models which have a tall profile.

The interior has also been revised, with a cleaner design and a centre console borrowed from the smaller Adam. Material quality is up, as Vauxhall seeks to compete with its more overtly premium competitors such as the Mini Cooper.

Do you think the new Corsa has what it takes to usurp the Fiesta at the top of the sales charts? Have your say below.
Tags
Read Full Story