Video: Porsche's biggest guns take aim at each other 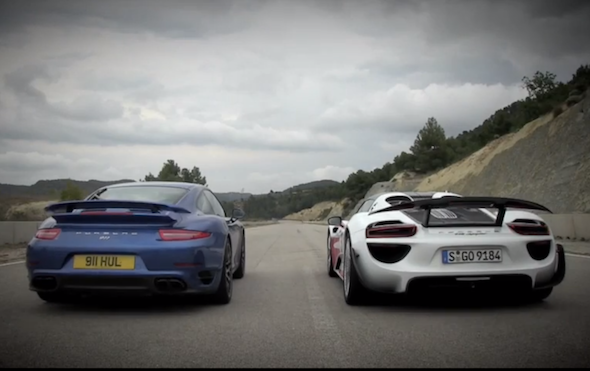 The Porsche 911 Turbo has always been something of a secret weapon in the Stuttgart manufacturer's sports car range. Sharing the same unassuming looks as the regular Carrera models, there's little visual clue as to the ferocious firepower endowed by the car's twin turbochargers.
It's much the same story for the all-new model. Powered by a 513bhp six-cylinder motor, it's capable of hitting 62mph from a standstill in a scant 3.2 seconds, before topping out 195mph. Full on supercar performance then, but without the attention seeking noise and pointy bodywork that mark out its contemporary rivals.

Impressive as the new 911 Turbo is, Porsche has a new kid on the block in the form of the 918 Spyder. A technical tour-de-force compared to the 911, it mates a race-derived 4.6-litre V8 engine to a complicated hybrid drivetrain for a total 875bhp.

On paper then, it looks likes the 918 comprehensively outguns its smaller brother. However, Porsche has a habit of being somewhat conservative with the quoted potential of its 911 models, and the Turbo in particular has been known to shame ostensibly faster cars, particularly with its clever launch control system engaged.

So which is faster? It seems Top Gear were wondering the exact same thing and organised a drag race between the pair. We won't spoil the result, but it's rather closer than you might have imagined.